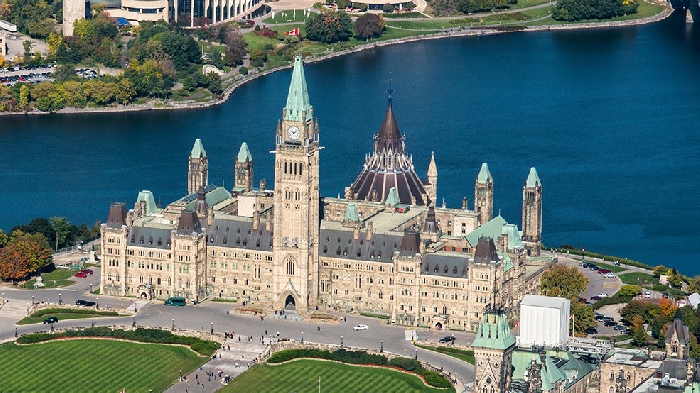 The federal government has shut down an opposition attempt to force the government to explain its next steps with the Trans-Mountain pipeline expansion.

The Conservative motion to hold a six-session study was made following the Federal Court of Appeal decision to overturn approval for the $7.4 billion project.

The judgment found that consultation with Indigenous communities on the project was not robust enough and that its environmental review did not adequately assess the impact of increased tanker traffic.

Conservative MP Shannon Stubbs called it "quite stunning" that the Liberals would shoot down her motion to hold a six-session study of the government's plan to respond to the ruling.

"It is utterly outrageous that the prime minister has clearly sent the Liberals into committee today to deny Canadians the opportunity to hear about their plan for the Trans Mountain expansion," she said.

"They have failed on the pipeline and now are shutting down questions (from) Canadians.

"I hope this concerns Canadians in all corners of the country."

Stubbs blamed Liberal failures for the abrupt suspension of the pipeline twinning project and accused the government of having no concrete plan to respond to the court ruling.

"That is absolutely unacceptable and the prime minister and the cabinet owe Canadians answers," she said.

Stubbs said the Liberals have imposed added costs and red tape on the energy sector, making Canada less competitive on the world stage. She said that flight of energy capital has become a "crisis."

Thousands of people have been thrown out of work as a result of Liberal actions, she said.

"They feel betrayed. They're angry. They feel that they're being kicked while they're down by a Liberal government which is all talk and fails to deliver," she said.


Last week, Kinder Morgan shareholders voted to approve the sale of the existing pipeline and other assets to the federal government for $4.5 billion.

Speaking at an event in Vancouver today, Prime Minister Justin Trudeau said his government is committed to moving ahead on the project "in the right way"  but did not offer a timeframe.

"All we have to do is look at the headlines to understand that being a prisoner to the United States for our resource exports, knowing that right now we only have one market, the U.S., for our oil exports, is simply not a wise strategy for Canadians moving forward," he said. "We need to get new markets for our oil resources."

Liberal MP Marc Serré, a committee member, called buying the pipeline an "investment in Canada's future" and said he's confident that it will get built despite the court ruling. The government is carefully reviewing the ruling and will determine next steps in due course, he said.

But NDP MP Nathan Cullen blasted the government for making a multi-billion-dollar deal to buy the pipeline just weeks before the release of a court decision that could nullify the project.

"That's insane. That's just fiscal imprudence of the largest order," he said. "For Mr. Morneau to put that much money on the line is shocking to me. Now it looks like we're stuck with this thing."

Stubbs had tabled a motion calling on the committee to invite Natural Resources Minister Amarjeet Sohi and Finance Minister Bill Morneau to appear before it to explain how the project came off the rails, and what the government intends to do about it.

It's not clear yet whether the federal government intends to appeal the decision or will instead try to complete the consultations the court said were lacking.

The Trans Mountain pipeline carries crude oil and some refined products between Alberta and the B.C. coast. Kinder Morgan applied to build a second pipeline parallel to the first that would triple its capacity; Canada's hope is much of that oil would end up in Asian markets.

Here is the full text of Stubbs' defeated motion:

That six meetings be allocated for this study;

That this study be concluded before November 2018, that the meetings be televised; and that the committee report its findings back to the House.