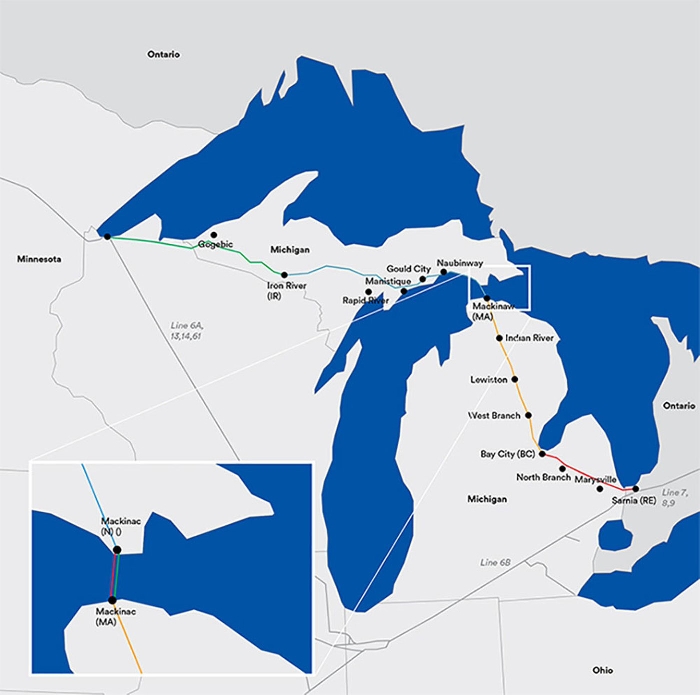 A damaged screw anchor for an underwater pipeline in the Great Lakes could impact Saskatchewans oil production.

On June 18 Enbridge disclosed an inspection of the companys Line 5 under the Straits of Mackinac revealed damage to a screw anchor support on the pipelines east leg, as well as indications of some form of underwater strike to the west leg.

The pipeline splits into two parallel pipelines, or legs, where it passes under the Straits of Mackinac. Thats the water passage joining Lake Michigan to Lake Huron.

The pipeline supplies oil and propane to refineries in Michigan and southern Ontario.

On June 25, Michigans attorney general was successful in getting a court order to shut down Line 5 within 24 hours. A following court hearing was held online via Zoom on June 30, but Judge James Jamo said he would issue a ruling in the coming days.

Michigans state government has been wary of Enbridges pipelines through the state since a different pipeline, Enbridge Line 6, had a spill in the Kalamazoo River in southern Michigan in 2010.

Line 6 was shut down and that resulted in a substantial impact on Saskatchewan oil production.

Crescent Point Energy quickly moved to ensure it has crude-by-rail facilities, either in-house or third party, available in each of its Saskatchewan operating areas.

The most significant was at Stoughton, but that facility has been in mothballs for several years now.

In recent years, the State of Michigan has been actively seeking to shut down Line 5, particularly since an anchor strike in April, 2018, damaged the pipe.

Enbridge has sought to tunnel under the Straits of Mackinac and put a new, replacement pipeline there, but the State of Michigan in 2019 sought to shut down Line 5 immediately.

Although the longer-term impact is still unknown, it is anticipated that curtailment, as well as the general decrease in production due to COVID-19, will somewhat mitigate the immediate impact of this shutdown," she added.

"Our government encourages all officials to continue to work to resolve this issue and allow the resumption of the Line 5 operation.

As for a resumption of crude-by-rail, she said, In the immediate future, its unlikely that incremental rail shipping capacity will be needed to transport Saskatchewan oil. However, when the North American economy returns to closer-to-normal, pre-COVID-19 conditions, the loss of Line 5 capacity could have a major impact on crude oil pricing in Western Canada and eventually lead to increased crude by rail shipments.

The cancelled Energy East Pipeline would have connected Western Canadian oil production, including that from southeast Saskatchewan, to markets in Ontario, Quebec and New Brunswick.

"The economic case for the Energy East project was very strong when it was proposed, and it remains strong. It is unfortunate, however, that Quebec, for example, remains firmly against such a project. As a result of the lack of a project such as Energy East, the Irving Refinery has been reduced to transporting Western oil to its Maritime refinery via the Panama Canal. Such desperate measures are unsustainable in the long term.

NDP critic for finance and the economy Trent Wotherspoon said, Any time there's a ruling or a decision that impacts our ability to get our energy products or products to market, it's concerning and this is a concern.

He noted the railways are needed for other products. Wotherspoon said that any time a safe reliable pipeline is not moving forward, those energy products end up on rail, and that becomes a concern from a safety perspective, among others.

We really need that rail system performing getting our potash, our agricultural products, our grain, and all of our other exports to market.

We really do need to have a performing transportation system as a whole, Wotherspoon said.

New COVID-19 maps are being launched today to provide more detailed information on the location of cases across Saskatchewan. One map has 13 regio...

CFIB estimates one in seven small businesses could close

There are 38 new cases of COVID-19 to report in Saskatchewan on July 30, bringing the total to 1,306 cases. The new cases are located in the Central ...

50 new cases of Covid-19 in Saskatchewan

One death, nine new cases of Covid-19 in Saskatchewan

There are nine new cases of COVID-19 to report in Saskatchewan on July 28, bringing the total to 1,218 cases. The new cases are located in the South ...

Eighth death in Manitoba due to Covid-19

31 new cases of Covid-19 in Saskatchewan