19 of 23 new cases are on Hutterite colonies 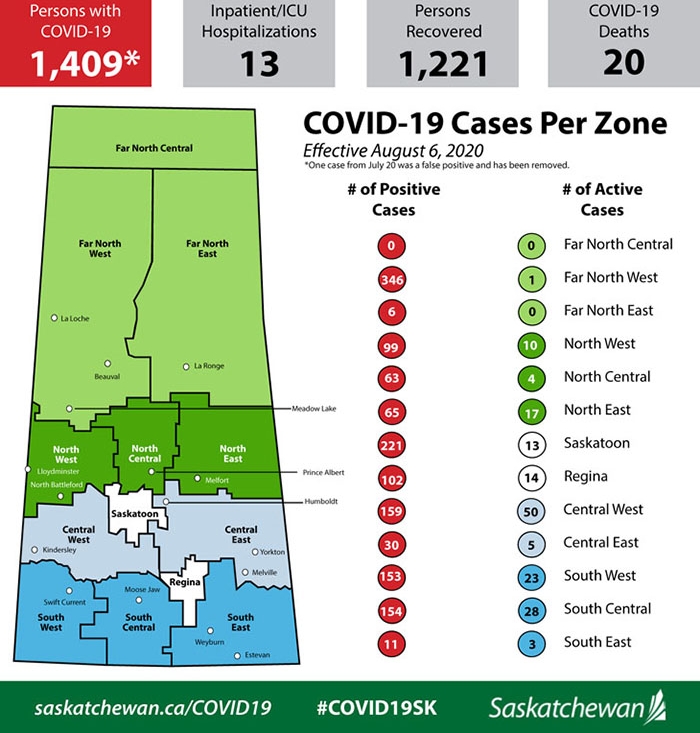 Of Fridays 23 new cases, 19 are people living on Hutterite colonies. The reported increase is a result of aggressive contact tracing and increased testing.

One more person has died from COVID-19. This person was in the South West region and was in the 60 to 69 age range.

One case from July 20 was a false positive and has been removed from the total case count.

Of the 1,409 cases in the province:
 206 cases are travellers;
 711 are community contacts (including mass gatherings);
 378 have no known exposures; and
 114 are under investigation by local public health.

 64 cases are healthcare workers; however, the source of the infections may not be related to healthcare in all instances.

 226 cases involve people 19 years of age and under, while the remainder are adults.

 20 deaths related to COVID-19 have been reported to date.

Yesterday, 2,129 COVID-19 tests were performed in Saskatchewan. This is the highest daily number of tests performed to date.

A number of employees of K-Bro Linens Regina location have tested positive for COVID-19. Public healths contact investigation is underway to determine transmission. Part of this investigation has included a microbiologists assessment of the processes for linen to ensure the linens remain safe for use in health care facilities. That review has determined there is no safety concern for processed linen. Note that all employees wear PPE during the performance of their duties.

Public healths investigation indicates there is no public health risk at this time; in the event that a risk to public health is determined, a public safety announcement will be made.

COVID-19 testing is now available to anyone who requests it, regardless of whether they have symptoms or not. A referral for testing can be made by contacting HealthLine 811. Since introducing universal testing, there has been an increase in requests to be tested with the corresponding increase in provincial testing numbers. The Saskatchewan Health Authority is working to ensure responsive service timing. Contact your physicians office if you are experiencing worsening symptoms. If you require urgent care, call 911.

General public inquiries may be directed to COVID19@health.gov.sk.ca.