Causes damage in 20 mile area from Scarth to Oak Lake 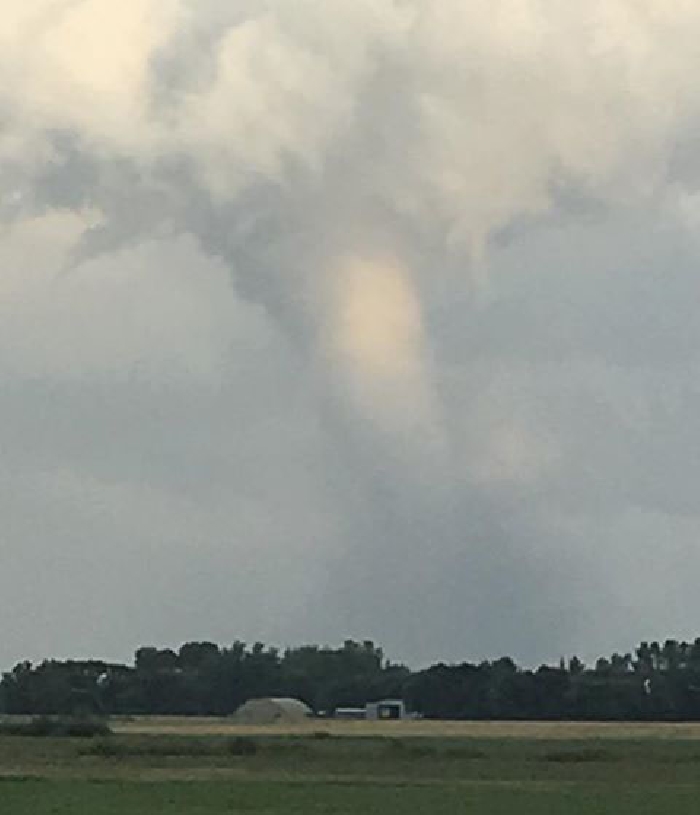 Brooke Dalziel captured this photo of the tornado from the parking lot of the vet clinic in Virden and sent it to the World-Spectator.

Two eighteen year olds from Melita, a man and a woman, were killed when they were apparently thrown from their car when it was tossed in the air by a tornado south of Virden Friday night. As well, a 54-year-old man from Sioux Valley Dakota Nation is in hospital with serious but not life-threatening injuries.

A tornado touched down south of Virden at 8 pm Manitoba time Friday night. The tornado carved a path from Scarth, south of Virden, to Oak Lake, leaving damage in its wake.

STARS Air Ambulance was dispatched to the Virden area at 8:30. Misheyla Iwasiak tweeted that she saw the tornado toss vehicles around and cause other damage.

Power lines were down and many Manitoba Hydro customers were without power.

Manitoba Hydro says the tornado caused damage across a 20 mile area, from Scarth to Oak Lake.

As of 11:45 pm Manitoba time Friday night, power had been restored to hundreds of customers but there were still 43 customers without power in Wallace-Woodworth, 80 in Pipestone, and 13 in Sifton.

Environment Canada was tracking a severe thunderstorm that produced a tornado near Scarth, Man., which is 13 kilometres south of Virden and nearly 275 kilometres west of Winnipeg, at 8 p.m. CDT.

Several photos were taken of the twister, from Virden, from Pipestone, and from Oak Lake.

Environment Canada said the thunderstorm was rotating southeast at 30 km/h toward Oak Lake Beach and Deleau, after it touched down near Scoarthbut the storm has now passed.

In the event a tornado does occur, Environment Canada advises people to move indoors, go to the lowest floor in their homes and stay in a room away from outside walls and windows, such as a basement, bathroom, stairwell or interior closet.

People should leave mobile homes, vehicles, tents and trailers and move to a strong building if possible. Worst case scenario, people should find a low spot and protect their heads from flying debris.