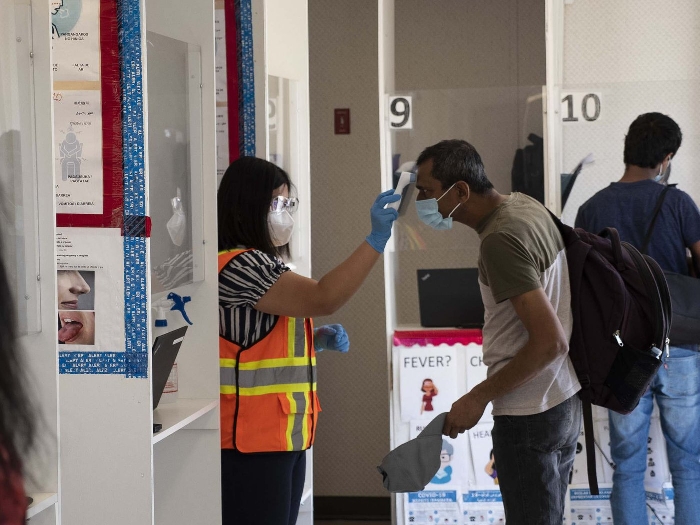 A Maple Leaf Foods employees' temperature is checked upon arriving at work, as is protocol as a result of the COVID-19 pandemic.

Of the 16 new cases reported, 11 were in the Prairie Mountain Health region. There are now 86 active cases in the region, of which 64 are part of one cluster.

"There was a lot of contacts early on in the cluster," Roussin said during Mondays media conference.

An increase in cases is to be expected, he added.

"Now our goal is to live with this virus. We know its still going to be here, likely a year from now, even more.

In addition to cases related to known clusters and previously identified cases, Roussin said there is small number of cases with unknown acquisition, or "community-based transmission."

As with other reopening plans, Roussin reaffirmed that schools are still set to open next month.

"We know theres a lot of benefits to getting kids back in school, so we need to have a cautious plan to ensure everyone is safe with it," he said. "The fundamentals can allow us to live with this virus rather than reverting to those major restrictions and shutdowns we had to do at the beginning."

In answer to a reporters questions about fears parents have about sending their children back to school, Roussin said, "we need to respect this virus."

"Nothing is without risk, but there is risk to not sending kids back to school. Theres risks to massive shutdowns. We know, with kids, they are less likely to have severe outcomes with the virus. Plus we have very thought-out, safe plans that we continue to reassess."

If the province finds a benefit in targeting high-risk locations with more restrictions, it will go that route, Roussin added.

Factors that might determine such an approach would include community transmission and effects on the health-care system.

Roussin said Maple Leaf Foods is going beyond public health recommendations, having a larger number of workers self-isolating than was recommended by Public Health. Workers are also being "cohorted," among other protocols put in place.

A cohort is a grouping of people with limited contact with other groups.

In an email, Maple Leaf Foods vice-president of communications Janet Riley said 144 employees have tested negative for the virus.

Public health officials, Manitobas Workplace Safety and Health and Department of Agriculture and Resource Development, as well as the Canadian Food Inspection Agency are closely monitoring the situation, Roussin said.

Maple Leaf remains of the opinion that operations at the Brandon plant do not need to be halted given that the province has not found evidence that the virus is being transmitted at the workplace.

But because that 14 per cent will be self-isolating when they develop symptoms, Roussin added, they wont have any or very few contacts.

"So the transmission chain diminishes. When we have unknown acquisitions, we could have a significant amount of contacts that we have to investigate," he said.

"When we look to places like Brandon, where were seeing high numbers of clusters, this is vitally important in those areas," Roussin said.

"People in those areas should take extra caution."

Beginning early Monday morning, the car lineup for testing at The Town Centre parkade backed up to the Princess Avenue turnoff on First Street.

A second Brandon testing site will open at the Keystone Centre grounds Wednesday.

"Clients may choose the site they prefer to go to, Town Centre or Keystone Centre. However, they may be redirected to the other site in order to help balance lineups and shorten wait times," according to a statement by Health, Seniors and Active Living Minister Cameron Friesen.

The best time to be tested is 24 hours after onset of symptoms.

"What we found was a number of our cases tested many, many days after symptom onset, and by the time were connecting with contacts, some of those contacts are already symptomatic," Roussin said.

He does not recommend asymptomatic testing.

Kevin Conlin, the facility manager at the Art Gallery of Southwestern Manitoba located in The Town Centre, told The Brandon Sun the gallery had to put up signs directing people away because people looking for the testing site were wandering in.

Prairie Mountain Health is asking that clients remain in their vehicles and not enter the building at either test site.

Finally, the province is also gearing up to provide more detail on case locations.

"We believe that before the week is out, well be able to be identifying new cases in a much more nuanced way, using zones or districts or another measurement," Friesen said.

In Manitoba, the total lab-confirmed and probable-positive cases of COVID-19 since March is 558. There are 196 active cases across the province. The test positivity rate is 1.59 per cent, up from the previous days 1.45 per cent. Tests totalled 1,364, for a total so far of 103,782. The number of deaths in the province remains at eight. Six are in hospital, including three in intensive care.

"Its up to every individual and every business to stay safe. We are in a pandemic."