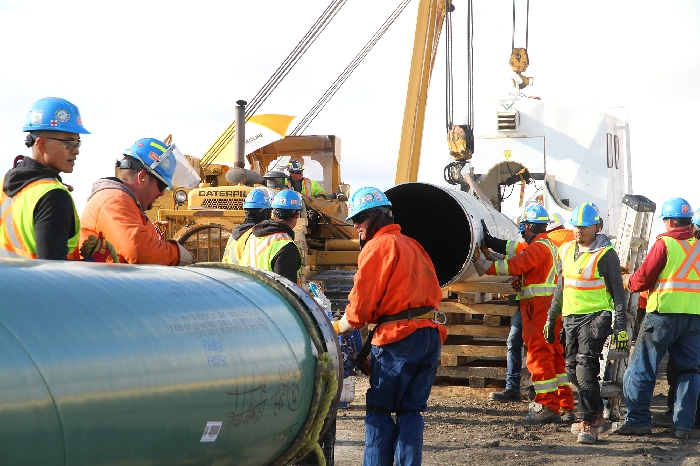 We are committed to advancing pipeline projects that will build a strong energy sector, strong Indigenous communities, and a strong Saskatchewan, Harrison said. That is why we have formed the Pipeline Projects Assessment Committee to work with our partners and support pipeline projects with significant Indigenous involvement.

This funding will help to achieve Saskatchewans Growth Plan goals to increase the value of Saskatchewans exports by 50 per cent by 2030, expand export infrastructure and to grow Indigenous participation in Saskatchewans natural resource industries.

The Peacemaker Project, led by the First Peoples Pipeline, will receive a total of $500,000 to further work on a proposed project to create a new energy corridor for western Canadian oil and gas to an export terminal near Churchill, Manitoba. Funding of $250,000 was provided in March 2020, with the additional $250,000 to be provided this Fall. The project will provide the opportunity for Indigenous communities to engage in profit sharing using an ownership structure throughout the life of the project, while western Canadian oil and gas producers would have world market access through the new energy corridor and a northern tidewater port.

This pipeline presents a significant economic opportunity for Indigenous communities to become more involved in our western Canadian energy sector and to increase market access for Saskatchewan products, First Peoples Pipeline Director Blaine Favel said. First Peoples Pipeline appreciates this support from the Government of Saskatchewan, which will help us continue to work to develop this project.

Project Reconciliation, delivered by the Indian Resource Council of Canada (IRC), will receive a total of $500,000 to focus on promoting Indigenous participation and ownership in the Trans Mountain Pipeline and Expansion Project (TMX) and other major energy infrastructure projects.

The Government of Saskatchewans financial commitment signifies a radical new approach to resource development and Indigenous economic participation in Canada; one which acknowledges that all levels of governments and Indigenous people work together to create sustainable Indigenous wealth, well-being and economic sovereignty, while fostering responsible development on our traditional lands, Project Reconciliation Executive Chairman and Founder Delbert Wapass said. These efforts supporting an economic framework for Indigenous ownership in large infrastructure projects provides a win-win for our people, industry, government and the environment. Project Reconciliation appreciates the financial support from the Government of Saskatchewan that helps facilitate moving this project to the next level, while laying the foundation for additional investments benefitting Indigenous people and all Canadians.

The IRC continues to advocate for increased participation of Indigenous people in the energy sector as well as supporting Indigenous ownership of TMX and other major projects, IRC President and CEO Stephen Buffalo said. The funding support from Saskatchewan will help Project Reconciliation get their message to folks on the ground and hopefully make this project and others a reality for the economic betterment of Indigenous people.

33 new cases of Covid-19 in Saskatchewan

Two Manitoba men fall through the ice and are killed

The Saskatchewan Internet Child Exploitation Unit has charged an Estevan man with child pornography offences in relation to an investigation that bega...

60 new cases of Covid-19 in Saskatchewan

Missing child has been found

167 km/h on Trans-Canada leads to $927 fine, injuries, and licence suspension

Brandon RCMP respond to dangerous driver on the Trans-Canada Highway On October 20, 2020, at approximately 3:15 am, Brandon RCMP were patrolling o...

57 new cases of Covid-19 in Saskatchewan

One additional death, 135 new cases of Covid-19 in Manitoba