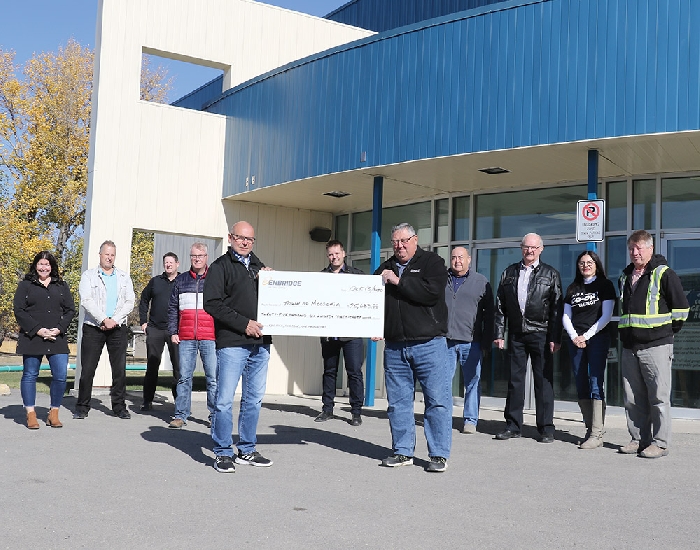 Enbridge donated $25,633 to the Town of Moosomin last week in an effort to give back to one of the communities that has helped during the completion of the Canadian portion of the Line 3 replacement project (L3RP).

In 2017, Enbridge established a program with Federated Co-operatives Limited in Saskatchewan and Manitoba, which ran from the spring if 2017 until L3RP was completed this summer.

We know that large construction projects like this have an impact on smaller communities, so were always looking at ways to make that experience and the legacy we leave behind a positive one, said Project Director Guy Krepps. This was one more way for Enbridge to support that objective and a nice top-up to the $3 million in and project-related community investment across the Canadian Prairies over the past four years.

Enbridge and contractor personnelOJ Pipelines, Banister Pipelines, SA Energy and subcontractorswere encouraged to use an Enbridge Line 3 Co-op number when purchasing gasoline, groceries or hardware items for personal and business use.
Just as an individual earns equity through their annual purchases at Co-op, so too did Enbridge, re-investing those funds back into the community at the end of the project.

More than $90,000 in equity was raised through Co-op stores in Saskatchewan and Manitoba, including $15,633 from the Moosomin Borderland Co-op, which will go toward Moosomin Parks and Recreation, to replace floor matting in the Communiplex Skating Arena. The town also received a grant of $7,500 under Enbridges Safe Community program, and $2,500 for the Moosomin Food Bank, bring the total to $25,633.

The Town of Moosomin, site of a large construction field office during the L3RP, was able to put the funds towards multiple projects including a hot tub for the Borderland Co-op Aquaplex, upgrades to an outdoor event facility and campgrounds, creation of a community garden, food hampers to support needy families at Christmas, a wheelchair accessible swing, $25,000 toward an aerial platform apparatus for the fire department and $20,000 for an air ambulance landing strip at the local airport.

Enbridge previously contributed $15,000 in 2018 to the Lower Souris Watershed Committee and its Moosomin & District Regional Park Peninsula Project toward cleanup of invasive species around Moosomin Lake.

Moosomin Rec Director Mike Schwean said hes very appreciative of Enbridges commitment to the Moosomin community and the projects the rec department was hoping to fund.

From gas stations to grocery stores, Moosomin is smart enough to know there was opportunity when we heard Enbridge was coming to town, said Schwean. Were lucky to have a great corporate community, just about everything is sponsored.

But the cool part about Enbridge is when they open discussions, theres no pre-prescribed project they want to push forward.

They just listened to what we wanted to do and told us what they were prepared to do and could do financially. I cant believe any community wouldnt want Enbridge there.

You couldnt meet better people to sit down and talk to, it was like Id known them for 40 years. I just cant say enough good about them and the reciprocal part of that is well help them in any way we can in the futureM/blockquote>

Due to Covid-19 restricting travel and economic activity, this has been a tough year for the local campground in Moosomin.

The majority of the campground revenue in 2020 will come from Enbridge contractors who stayed in the 12 refurbished sites this summer.

Enbridge Senior Advisor, Communications David Coll says the community of Moosomin has always been welcoming to Enbridge and their workers and they wanted to show their appreciation by continuing to fund projects in the community.

The fact that Moosomin was a construction field office for us and the community has a lot on the go, weve received requests to fund community projects and weve been happy to do that, said Coll.

The community was extremely welcoming to us in addition to being a field office for us during construction. Moosomin has been a natural location for us with the area weve been working in.

Enbridge wants communities that have helped them to feel a positive impact from their work says Coll.

We want to leave a legacy behind because he community has been so supportive and welcoming. With the campground, Mike and the rec department were more than helpful in accommodating our workers during a difficult time and that goes the same to people who rented rooms to some of our work force. We had a very co-operative and helpful community and we really wanted to show our appreciation for that and make sure that was known.