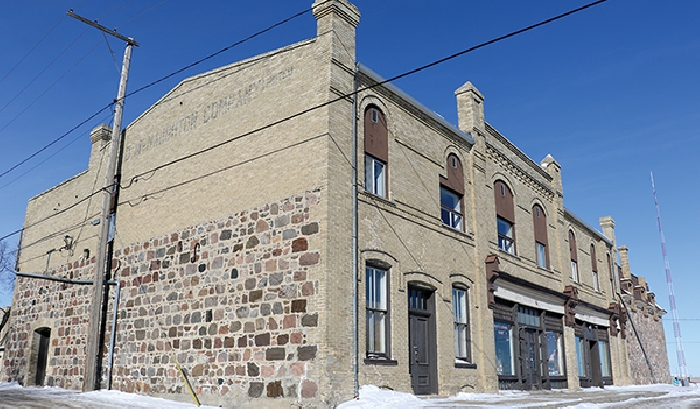 The McNaughton building in Moosomin is one of the many heritage buildings that can be found in the prairies.

The Heritage Conservation Branch will be holding a series of webinars on the adaptive reuse of historic buildings that will take place this week and next.

Heritage Planning and Policy Advisor with the Heritage Conservation Branch, Marvin Thomas, says the best way to preserve a building is to find a new purpose for it.

The best way to preserve a historic building is to ensure it can continue to be used in some fashion. There are some very good museums and interpretive centers that historic buildings are being used for, but not every historic building can be a museum. Its important to find other kinds of uses for them. That might be a purpose for which it was originally built but often times its for a new use. There are lots of examples of historic buildings being used for new things, like condos for example, or perhaps other types of housing. The architectural character of these buildings often makes them popular for things like restaurants or retail shops or professional services. That process of making a building functional for contemporary use but at the same time preserving its heritage features is what we call adaptive reuse, which is what the webinar series is about. Said Thomas.

The webinar series will see a variety of different speakers talking about the best ways to preserve historical and heritage buildings.

Were going to look at it from the perspective of some of the major principal players that are involved in repurposing a building or adapting a building for a new use and so that will involve property developers looking at it in terms of the business case such as how to identify suitable uses for the building. Well also have a municipal official talking about some of the ways municipalities can support the process. Well also have someone talking about meeting building codes when they repurpose a building, which can be a challenge sometimes. Were actually going to have some archeologists from our branch speaking about the types of investigations that might be needed in certain situations where your building might be located on a site where there have been past activities, historic or indigenous. They sometimes need to be assessed to make sure there arent any archeological resources that are being affected by the redevelopment.

Thomas explained it is difficult to keep a building preserved without generating income for it. But the process of redeveloping a building has some requirements that can prove difficult for developers.

Without generating any type of revenue or income, it can be very expensive just to freeze a building in time and keep it as a museum piece as opposed to keeping it as a functioning viable building in a community. Its really something a building owner would decide or a developer. One of our speakers will actually be talking about the benefits of refurbishing a building and giving it a new use. Its not like building a new building doing a straight-on renovation of a non-historic building. The biggest thing is that certain architectural pieces of the building really express and embody and create the character of that building. So when youre doing that renovation, youll have to take care to preserve those. So balancing the functional needs of a contemporary building with the buildings heritage and character is the biggest challenge. That and building code requirements.

Some of the technical construction issues around working with old buildings, their design materials, and all that are slightly different. You might not always have the workers available who have the skillset for that, which can also be a challenge.

He explained that sometimes it can be difficult to find people with that set of skills.

Its had to develop a workforce if theres not an industry to support it and its hard to get the industry rolling without the workforce able to do the work. Its a sort of chicken and the egg thing.

A benefit to utilizing historic buildings, according to Thomas, is the aesthetic they provide to the business operating within.

Due to their often unique appearance, they can draw in additional customers.

In retail and the hospitality industry, room accommodations, bars, and professional offices, theres that quality character in the building that is unique and becomes part of the businesss branding and marketing strategy and part of their image. Its just something they feel has an appeal towards the clientele that they are trying to attract.

Thomas explained that the utilization of historic buildings also benefits the community economically.
In many ways, repurposed heritage buildings benefit the community. For one thing, as we mentioned, their economic benefits. They house businesses in the community that serves the community. Theyre a place of employment and provide economic generation. They also have strong cultural and social values, they help connect us to the past and help tell a story of how our communities change and developed over the years. We also shouldnt forget the environmental benefits of repurposing buildings. A lot of energy and materials went into their construction, so as long as they can be used its better than sending them to the landfill. Said Thomas.

Greg Nosterud in Moosomin, who has been involved in several preservation projects, echoed many of the benefits brought up by Thomas.

He says that Moosomin, like many small Saskatchewan communities, benefits from having a wide variety of different historic buildings, even if some are not registered as heritage.

I would say we have a great inventory of historic buildings and some that arent registered as heritage. Its a bit of a process to get a building properly identified as historic. You have to start at the municipal level of historic importance, then you move on to provincial and then national. Said Nosterud.

Nosterud noted a few of the more prominent historic buildings in Moosomin, which included the McNaughton buildings two locations as well as the Moosomin Armoury, a project that Nosterud was personally involved in.

The armoury was renovated and refurbished but required plenty of work to complete.

Because its a brick building, the first step was to repair the damage thats caused by weathering and frost to the brick. We first undertook that as our first step to preserve the building. Then we addressed the roof where we completely refabricated the roof, said Nosterud. Its now a multi-purpose building for gatherings, dances, trade shows, bazaars, meetings. That sort of thing.

Nosterud applauds the people who live in and maintain historic homes.

One of the best types of people preserving older buildings in town are residents themselves living in these old historic houses and keeping them looking good. There was quite the effort a few years ago by a historic group in town and theyve actually got a walking tour to these houses. When its completely in a private persons hands and they take such an interest that they conserve the house, that goes a long way. A tip of the hat to those people because repurposing them to live in goes a long way.