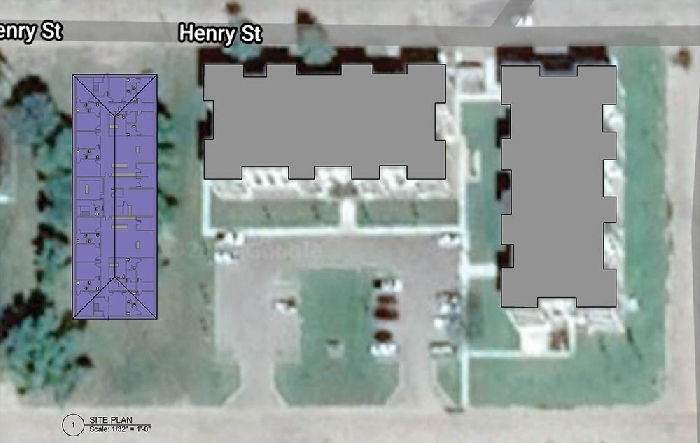 The site plan for the new Long-Term Care/Assisted Living Facility planned for Moosomin. It will be located on Wright Road next to Pipestone Villas.

A series of Zoom meetings are coming up March 11 to provide more information on plans for a 42-unit facility in Moosomin that would offer both long-term care units and assisted living suites.
The three-storey facility would be built on Wright Road, next to the two Pipestone Villas buildings.

It would offer meal service and light housekeeping services, which would also be offered to current residents in Pipestone Villas.

Larry Scammell of Kohr Capital said there will be additional information available since in-person investor meetings were held in Moosomin in January.

The intention would be to have the project budget ready, and we will reference that on the Zoom call, he said. We wont dissect it but that will certainly be announced that it is available for the follow up discussion.

The two main things people interested in getting involved in that first closing would want to see are the Limited Partnership Agreement and the project budget, which will lay out what kind of returns people can expect. Those are the two primary documents that need to be reviewed before a decision can be made, and those will be available by March 11.

We need the offering memorandum in order to accept registered funds, TFSAs or RRSPs. We dont feel that well need that for the first closing, but for sure for the second close later in the summer or early fall.

Scammell said he encourages anyone with any interest in the project to sign up for the Zoom sessions.

I would say anyone who has even a sliver of an interest in Moosomin as a community, in providing another option for seniors, whether its independent living or assisted or long-term care, if people have any interest at any level, they should tune in. Itll be worth your time. If youre curious, register. Theres no cost, theres no obligation. If you want to give us 60 minutes of your time, youll be more educated when the call is done.

Scammell said he is enjoying working on this project, and is looking forward to seeing it go from a concept to a physical facility.

Thats the exciting part around it, he said. If I think of all the other projects that were currently involved in elsewhere, as Kohr Capital, are they exciting? Sure. Is this one different? Yes, because youre able to experience and participate in so much more than just, Hey we capitalized a project. Its everything from, Hey were meeting a need for people to Were creating a new home for people to Were assisting or in delivering on a need for a community that wants it.

In Moosomin, we seem to have very good community engagement, the community saw a need, were trying to fill that need, and weve had great community support, great feedback so far.

Scammell said he is confident the project will move forward. Theres great confidence that this will go ahead, he said. I cant see anything that would prevent this project from proceeding.

There will be two Zoom sessions on Thursday, March 11 at 12 noon and 6 pm.

Registration is required, and people can email larry@kohrcapital.com and the Zoom meeting invitation will be sent.