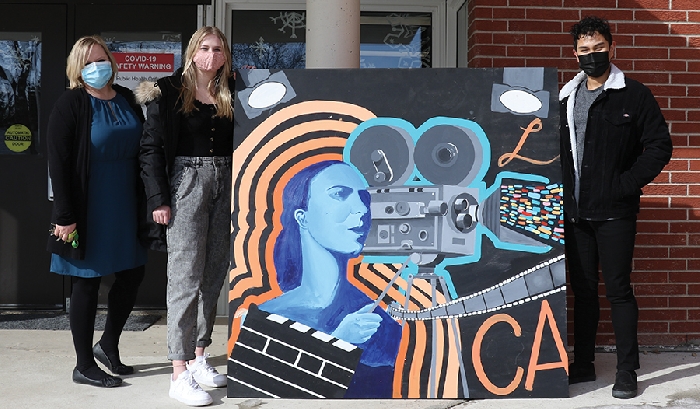 Former students Primo Oroyo and Kadence Meredith have spent nearly a year working on the project, which is now nearing completion.

Kadence Meredith explained that they chose to incorporate a theatrical theme into their mural to best represent the theatre.

The location is going to be the theatre where a lot of performance arts happen. So we decided to focus on performance arts and we wanted to include a bunch of different types of art, Meredith said.

We started by just sketching on pieces of paper. We cut out three different pieces to represent the three different parts of the mural. Then once we had that down, we started painting, drawing outlines, then base coats and it changed as it went on. New ideas formed and it just kept evolving. Every time we went to paint we would stop and look at it and wonder what our plan for the day was, then implement something new. Youd paint something one day then something else overtop it.

The mural is a first for Meredith.

This is my first mural. I usually work on smaller scales, so the bigger scale is much harder to put in details because you have so much space. Something you could usually paint on a smaller canvas could be done in around 30 minutes, but on a bigger canvas, it could take a full day. And thats the big thing about this mural, theres just so much space.

The project has been a big one for Meredith, who is currently studying Creative Technologies at University of Saskatchewan.

She says that the young artists have lost track of just how much time they have spent on the project.

Weve lost track of how much time we put into it. Its hard to tell, we put in a few hours here and there, and then other days we just come in and paint for eight or nine hours. Its different from what we expected and its a bigger challenge than what we expected, especially with being a full-time student and having a job, its been difficult to fit it in. But its coming along for sure. 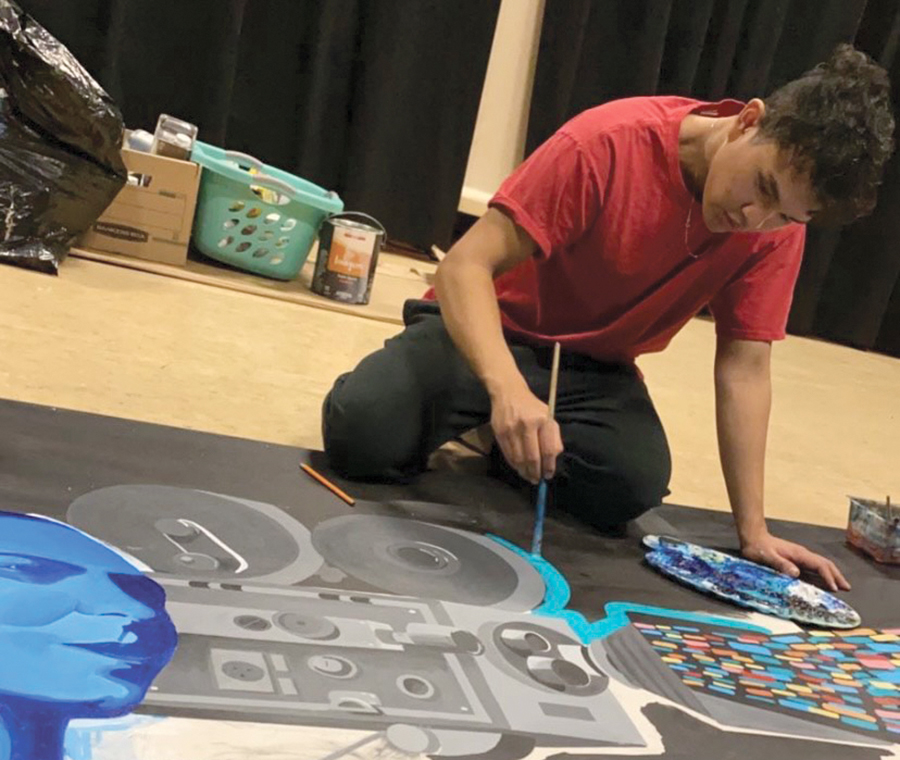 Primo Oroyo working on the mural.

Primo Oroyo, who is currently studying Architectural Technologies at Saskatchewan Polytechnic, explained that the process required a lot of thinking before they were able to start painting.

There was a lot of brainstorming happening and we tried incorporating different art styles. We have fauvism happening, some realism, some cartoonism, and the biggest challenge has been piecing that all together to make it cohesive. Said Oroyo.

But with both of the artists now studying at university, the biggest hurdle has been scheduling.

The biggest struggle was mostly the scheduling because were both students and have hectic schedules, and I also work part-time at the store. So its mostly time constraints that we struggle with. We were supposed to get this done a few weeks ago, but things come up, said Oroyo. We come in and we try to figure out what we are going to do, then we decide what we can do with the allotted time that we have been given on that certain day. We brainstormed a lot. Its not just my idea but its our ideas.

Oroyo expressed pride in his work on the project, noting that he did not expect it to turn out as well as it did.

I like all of it. I painted the camera and I like how it turned out, its pretty detailed. I like how nice it worked out in the end because its a pretty large-scale mural and the best you can hope for is for it to look good, but I wasnt expecting it to look like this.

The idea was initially brought forward by Terry Grant with the Moosomin Community Theatre.

Vice Principal of McNaughton High School, Sherrie Meredith, says its not the first time they have done these types of projects in the community.

Weve had opportunities to do large scale artworks for display in the school and in the community. For example, several years ago we did a mural alongside the Legion. Most recently a student of ours did one on the side of the Cork and Bone. We were also helpful with the swimming pool mural restoration after the flood back in 2014. Its a nice way for us to get students art out in the community. We have also done a number of mural projects in our high school over the years. Its always been something thats been a source of joy and pride in our school. So when talking to Terry, the idea of doing a mural for the theatre had been a few years in the making. They actually renovated not that long ago so it seemed that now was a good time to create a mural as it would be a nice addition to the space. Meredith said.

The project had been delayed due to the 2019-2020 school year being cut short.

It was pretty exciting for our kids at that time to make plans for the project. Unfortunately, our year got cut short last year and so the project was in its starting phases and had to come to a halt. But the kids who had brainstormed it were former graduates who were passionate about completing the project. Since they are taking post-secondary from home this year, they have been able to find ways to continue working on it over the past year and are excited that it is nearing completion.

The project is nearing its final stage. Once it is complete, it will be revealed in full at the Moosomin Community Theatre.
Tweet