The long road to Canadian citizenship 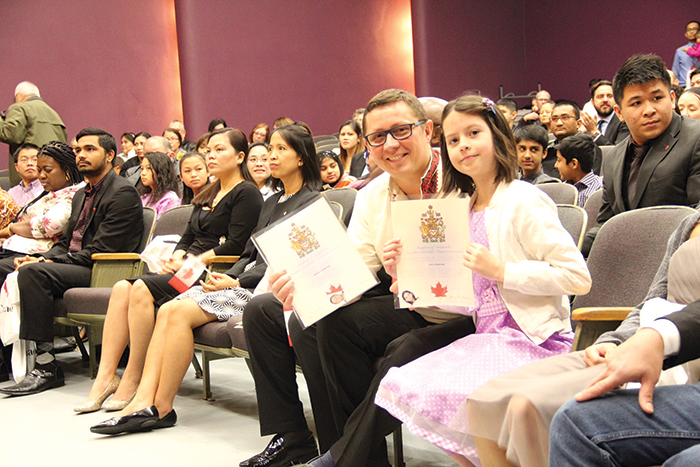 Roman Chernykh and his daughter Anna at the Canadian citizenship ceremony in Regina.

A recent Canadian citizenship ceremony was a dream come true for Moosomins Roman Chernykh, who grew up in Ukraine.

Theres a long story around why I decided to move to Canada, said Chernykh. I used to work on the cruise ships, and Canada was one of the ports of call we used to sell to, from New York to Halifax and St. Johns. I fell in love with Canada, I love everything about Canada, and of course, serving the Canadian customers made me understand the Canadian culture when I worked on the ships.

I decided to move on and was looking for an opportunity to get my degree in Canada and thats how I ended up staying in Canada. I travelled around the world and I saw many countries and many nationalities. I worked on the cruise ships for 15 years, and Canada has the best people in the world. They are so respectful, so kind, and they are such culture oriented people, and they are educated. Thats why I decided to stay here, its the best country, its the most peaceful, and it has the best people.

Chernykh grew up in Ukraine when it was still a part of the Soviet Union.

While I was growing up, it was the communism time, it was all about freedom, and your freedom was eliminated. You couldnt speak or say what you wanted out loud. Thats just not the right way to live your life.

There was even a small incident in my family. My brother, who is older than me, wrote a letter to one of the congressmen in the United States. For the next two years we were followed by the KGB and people in black suits and they were asking questions, even in school. I was maybe nine, and my brother was 16.

According to Chernykh, he decided to become a Canadian citizen so that he could completely be a part of Canadian society.

The citizenship process was long, it took me about seven years to become Canadian, it has ups and downs. I stayed for three years living without my family until I got my permanent residency. Its a long process, but I think everyone should go through that process. Theres no such thing as an easy way. You want to be Canadian so you have to prove that you want it. You have to go through paperwork, background checks, and write a citizenship test and a language test, and the final step is the ceremony. There are many stages and every stage is probably two or three years apart.

According to Chernykh, the Canadian Prairies are similar to Ukraine in some ways.

Theres no difference. Thats why I think Ukrainian Canadians who settled down in the 1800s, they looked at the prairies and they said, it looks exactly like Ukraine, were going to stay here. Climate wise, its not much different. We also live in a pretty flat country. Some parts of Canada of course are different, but Saskatchewan itself is pretty much what Ukraine looks like.
Chernykh received his Canadian citizenship at the same time as his daughter, and his wife and son should receive their citizenship later this year.

Some people say permanent residence is the same as citizenship, but its not the same. Now Im Canadian, and Im so proud to be Canadian. Id say there arent many Canadians who are proud to be Canadians like I am proud to be Canadian, because it took me such a long way to come here. Im including also 15 years working on the cruise ship because we were always dreaming about different countries and a different lifestyle, and then we ended up here, so it took about 25 years to get here.

Chernykh says that he does not know what would have happened if he had stayed in Ukraine and not taken the job working on the cruise ships.

But they said that it was no problem and all I had to do was send my passport. Two days later I was working on the cruise ship. I fell in love with it, even just serving food. As long as you make people happy you do something, and thats how I fell in love with the hospitality business. Roman now manages the Motel 6 in Moosomin.

I was looking for something to help my parents to change their lifestyle and thats why I brought my brother here. Hes older than me and he said, if not for you, well all be stuck. We dont know what will happen. It just pushed me to go forward.

Theyre living in a war in Ukraine. People feel like there could be a war at any time, and in our DNA weve already experienced that, weve experienced being treated by neighbouring countries basically as slaves and there has been great hunger. They always try to eliminate the nation as Ukraine. People dont really talk about that, but to compare Stalin and Hitler, they were pretty much the same person. My mom and my wifes parents are still there, theyre pretty settled down so they dont want to move. Theyve been here to visit us but they still want to go back home. I think Ukraine is a great country but we werent lucky enough to have good neighbours, but I hope that will change.

Now that he has his citizenship, Romans long-term goal is to own his own business and contribute to the community that way.

Now that Ive become a citizen I want to maybe create some sort of business and be a part of the community. Perhaps maybe a restaurant, Im so passionate about that, so hopefully that will work out someday.

He also hopes to go back home as a Canadian election observer to help the fledging democracy in Ukraine develop.

I just applied for some voluntary work I can do in Ukraine as a Canadian citizen, as an observer for the elections. They will send me there as a volunteer.

Roman says he feels both fortunate and proud to be a Canadian citizen.

We are lucky to be in Canada, Canada is a country of immigrants, were from all over the world.