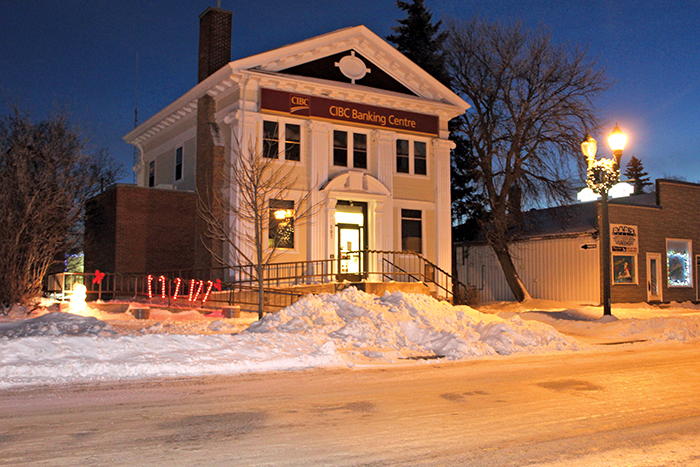 The CIBC branch in Elkhorn is slated to be closed in August.

The future of the CIBC bank building in Elkhorn became the central issue at a meeting Tuesday night to dicsuss the bank branch closure.

A local committee is hoping to attract another financial institution to the community, and has made contact with several Manitoba credit unions.

The committee members believe the bank building, on Elkhorns main street, would be a good location for another financial institution if one can be enticed to Elkhorn.

The question is whether CIBC would allow the building to be sold to a potential competitior, and while the question was asked at Tuesdays meeting, there was no answer from the bank.

Jon Kastikainen, Senior Manager Stakeholder Communications with CIBC, said following the meeting that he doesnt know if the bank will prevent the building being used by a competitor if it is sold.
As I promised the gentleman from the Chamber of Commerce, I would be happy to follow up with him. I do not have the answer right now unfortunately.

Lots of times we see community groups, not-for-profits, interested as well. In this case its a beautiful building on the main street and we would be happy to take any offers or inquiries from community groups.

Mark Humphries of the Elkhorn Chamber of Commerce said after the meeting that he didnt hear answers on the questions he raised.

I dont think we did get the questions answered, he said. It was the typical response that we were all expecting. Theyre toeing the party line, but a direct answer wasnt given for most of the questions. That was disappointing, because it was CIBCs chance to let us all know where we stand.

Humphries said he believes it is very important for the bank to lay out any restrictions on future uses of the bank building.

I think its one of the most important points, for the buildings sake and for the towns sake, he said.

If CIBC is feeling that Elkhorn isnt viable anymore with footfall through the door, why would they want to hold on to a non-competitive clause, because obviously theres no threat there.

Humphries said a local committee is contacting other instititutions to see if any are interested in setting up a branch in Elkhorn. The subcommittee are phoning around to nearly every credit union in Manitoba to see if anybody wants to come in.

Now that weve got this meeting out of the way, the ball starts to roll, said Humphries. The guys are already on the phone and they have related back to the chamber that theyve had a lot of leads into various organizations and were waiting back for replies. These people cant reply until they do their due diligence, so its going to be a slow processI dont think its going to happen overnight.

Humphries said he is optimistic a new financial institution can be found to serve the community. Elkhorn is a progressive, forward-looking town, he said. I would think some financial institution would have the sense to come in and run with it, and Elkhorn would get behind it and support it. We just hope we can get on it early enough and keep it moving.

Kastikainen said the Elkhorn closure comes as CIBC is in the process of reducing its branch network by about 10 per cent.

Were always looking at our branch network, he said. What I can tell you is our CEO recently said that were currently around the 1,100 mark and he sees us closer to 1,000 over the next couple of years, and thats across Canada.

We look at a variety of different factors. The main thing we look at is that there is another banking centre within a reasonable distance for those that arent prepared to move over to another option such as telephone, internet or online banking.

I think it was a very successful meeting. Some really great questions came up. Theres no doubt about it, we announced the closure within the last year and theyve answered the questions at the banking centre as well as they can, but we also wanted to provide an opportunity so they can get a regional and a national perspective on the reasons for the closure and what options are available to them.

What did Kastaikainen take away from the meeting? Theres no doubt people are frustrated. They hate to see a local banking centre in a community close after so many years. We completely understand that, but any time we do have to make an announcement of a closure, we are very mindful of the fact that there is driving involved and we want to do whats best for our clients.