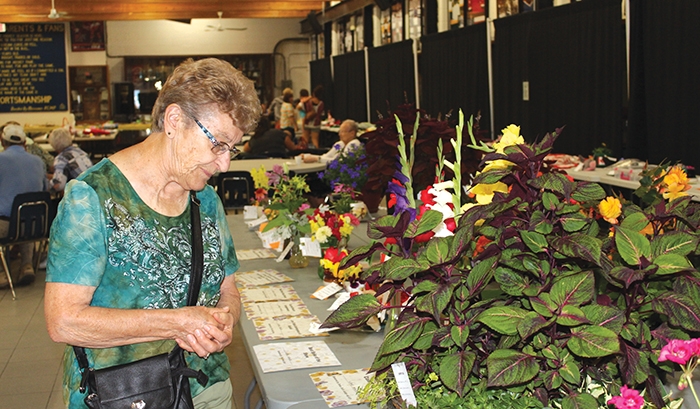 Looking over some of the horticulture displays at last years Moosomin Horticulture Show.

The 133rd annual Moosomin Horticulture Society show is coming up this Saturday, August 18 in Moosomin.

The show is set for 2-4:30 pm Saturday at the Moosomin Convention Centre.

Dorothy Windsor has been involved with the Horticulture Society for years, and is hoping that people who have never been to the show come and check it out this year.

We would like to keep it going, she says. Its been going on for a very long time. Years ago it had cattle and horses.

Some people have never been there. They dont have any idea what its about. There were a couple of people who came last year who said they had no idea we do this.

She said the fair includes a lot of different displays.

There are exhibits for show, which show off peoples talents. It includes just about everything. Canning, baking, stitchery, quilting, crafts. I would say the baking and the quilting are the biggest things.

We have a big photography section. We had to put it in a class by itself because we had so many entries. There is some beautiful photography.

We have two members who have been with it since they were eight years old and are now seniors.
Winners in some of the categories have a chance to go on to the next level.

Fairs like the Moosomin Horticultural Fair are not as common as they once were. Some places have had to give them up. Some of the smaller ones have gone by the wayside, said Windsor.

Most families have two parents working, and if they have any time, they want to spend it with their kids, and you cant blame them for that, she says.

Im hoping that a few people who have never been to the fair before will come out and see what its all about. Come see what weve got, and what talented people we have around here.