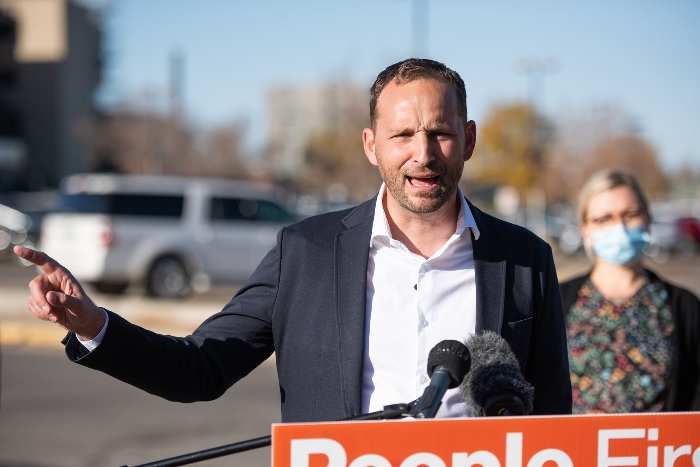 Between Oct. 16 and Oct. 19, all six party leaders were asked the same set of five questions focusing on issues facing rural Saskatchewan. Meili responded by phone from Saskatoon on Oct. 16.

Asked about the infrastructure deficit facing rural municipalities and towns, given depopulation is a continuing trend, Meili said, We have to recognize a lot of our communities were built many decades ago. Theres a lot of services that have to be provided, and municipalities are having a tougher time doing that. You also have a lot of folks out of work. So, as we're putting money into addressing the infrastructure deficit in our schools, in our hospitals, we also need to be thinking of our small towns and cities, as well, and how to work to put people to work at same time as we fix up some of these essential services.

He noted a distinction between the NDP and the Sask. Party is were going to make sure as were doing that, we use local workers.

With the continuing trend toward fewer rural residents, what will the NDP do, if elected, to ensure agriculture remains a priority for the government? Meili said, Agriculture is the backbone of our province. Im a farm kid, myself.

He added most people in the province have a connection to farming and agriculture.

The NDP would change the margin level on AgriStability to 85 per cent to help farmers in tough years, noting its been dropped down to 70 per cent for producers.

Were also going to make sure folks can take advantage of the opportunities that we have in renewable energy, to produce power on their own property with our Renew Saskatchewan program.

Using solar energy could lower their power bills, he said, likening it to another crop, producing power instead of grain.

Meili said they would also bring back STC, which would help farmers ship parts.

With regards to keeping rural emergency rooms open and having sufficient doctors in rural facilities, like Preeceville, Meili, a physician himself, said, I worked as a rural family doc in my earliest years of practice, and has seen, especially in recent years, the challenges to provide that care.

He noted the Saskatchewan Party closed 12 rural emergency rooms in response to the COVID-19 pandemic, and three still have not reopened.

We need to do the work to re-open every single one of those emergencies Mr. Moe closed, he said, adding the NDP have committed to keeping every one of those ERs open.

We've committed $10 million dedicated added funds for rural health care, and we're going to work with the colleges, the faculties of medicine, nursing, etc. on a recruitment and retention plan, Meili said.

One of the things I learned in practice was that the folks that are most likely to stay, are the folks who come from rural Saskatchewan, and do their training in rural Saskatchewan. So our recruitment really needs to focus on making sure we get people from the rural areas, into health professional professions, train them out in rural areas so they're more likely to put down roots and stick around.

Asked why it seems some places, like Estevan, see few University of Saskatchewan-trained doctors, Meili responded that some places like Swift Current have been more successful in retaining Saskatchewan-trained doctors. One of the reasons is they have a medicine residency training program, he said. Meili would like to see more distributive learning so people from rural areas are seeing themselves in medicine, and everyone training in medicine, in Saskatchewan, is getting exposed to what its like to practice in rural areas.

That's how you get comfortable working in smaller communities, and also putting down roots.

With internet access still painfully slow in for substantial portions of rural Saskatchewan, amplified by the need of children to do school work from home during the pandemic, how would they improve rural connectivity? Meili said, The COVID-19 pandemic certainly exposed both the family needs, and the needs of students doing things online, but also so many business things are happening online.

He noted precision agriculture and marketing need that connectivity, saying, If youre in business now, youre online. And rural Saskatchewan is all about agricultural business.

It's extremely important for quality of life in rural Saskatchewan, and to business success. And that's why we're committed to working with SaskTel, to make sure that wherever you are in Saskatchewan, youre able to access high-quality broadband internet, Meili said.

Regarding the rural environment and water quality, Meili said, We really haven't had a government thats interested with water security and water safety. It's extremely important, when you think about drinking water, access for livestock, irrigation et cetera, it's extremely important. And we will work with local communities to develop a water safety strategy to help conserve water.

That's one piece of it. We think climate change is important. And we're going to be making major efforts through Renew Saskatchewan this discussion on the transition to renewable energy and continue to shift our approach.

Meili said the NDP would provide more clear and accurate guidelines are to ensure that the safety and precautions are taken by across the province.

With respect to algae blooms, Meili said, Were putting fertilizer into lakes, which makes plants grow. Its pretty straightforward. Now we need to be looking at how we have a runoff strategy as part of our regulations and drainage and our overall water security. This these bodies of water are crucial to our communities.

Kim Schaefer decided to grab a few ZING tickets on a break from work in late October. Little did she know that one of the four tickets she grabbed  a...

The ongoing pandemic response and fulfilling the governments election commitments are the two main focuses of the 2020 Speech from the Throne, entitl...

Manitoba Public health officials say 11 additional deaths due to COVID-19 have been reported Sunday, November 29, including:  a male in his 60s fro...