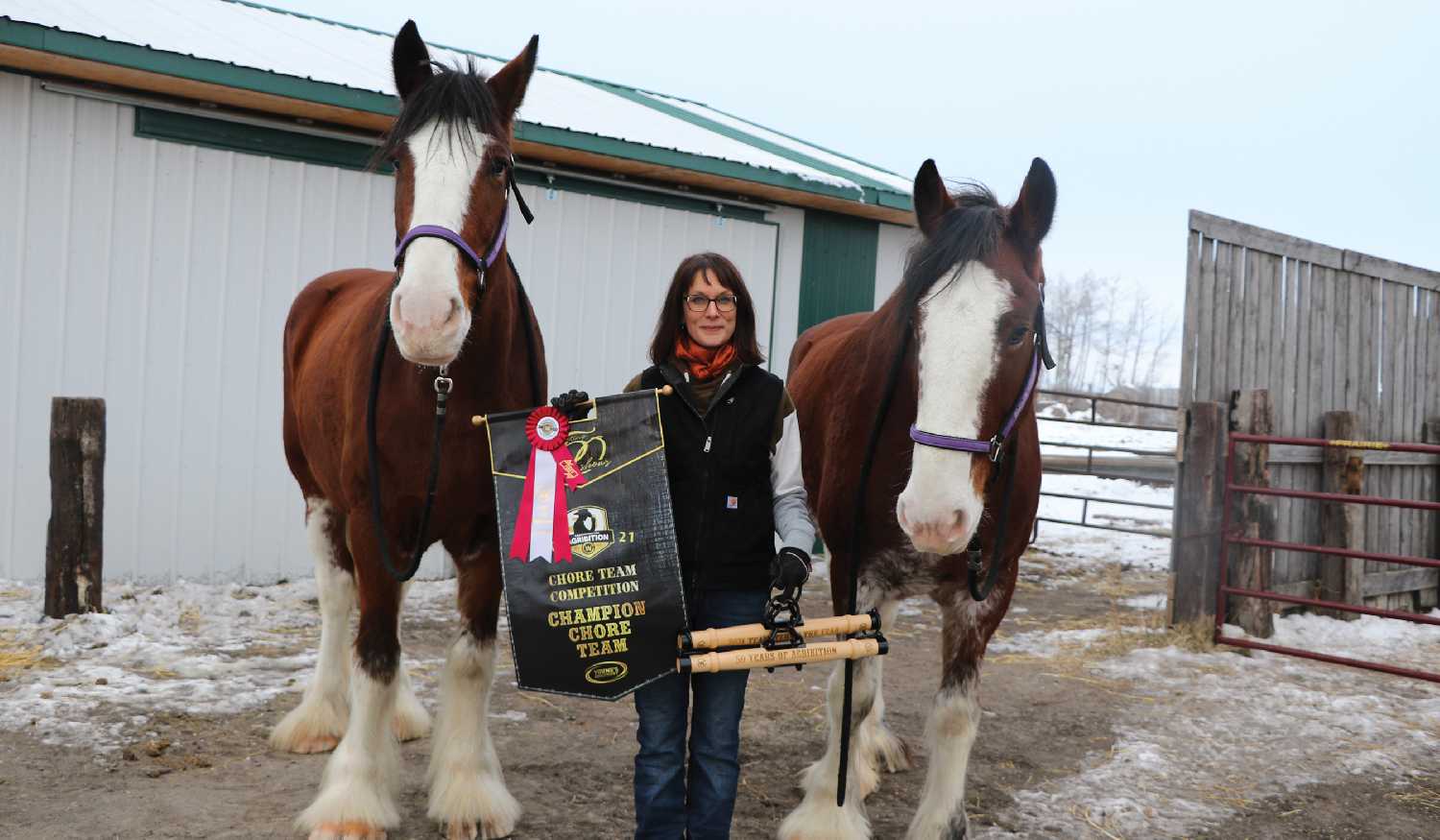 Moosomin came out strong in the Chore Team competition at Agribition this year.

I had a really good couple of days there, says Michelle.

What they did this year at Agribition is, they had to change it up a little bit to combat Covid and so they tried to get most of our competition in, in one day. So what they did is they set up a pattern. So you have to drive your horses, ground drive them to a little skid thats heavier and you drag that, you hook to that, and then you go hook to the wagon and you cant cross lines and go through an alley in a figure-eight, you have to dock, do all these things in a pattern.

Then they time you also so you can only do it in so many minutes and you get points for each obstacle that you complete and how you do it.

Then at the end they rate you. There were 12 teams total that they accepted entries for. Normally on other years they do a pattern competition and then they do a speed race where its fun and you throw bales and they do a water race to see how much water you can keep in, but they didnt do the fun events this year, they just did two rounds of the patternone round in the morning and one round in the afternoon.

Twelve teams did the patterns and then at a dinner break we brought in some farm equipment, some drills and stuff like that just for an audience pleaser, just to show people what else we do.

Michelle says the competition isnt something horses can be specifically trained for.

You work with your horses, you dont necessarily train them for each obstacle, you just work with them, spend time with them just like any riding or any animal sport.

You just work with them and not every obstacle is the same, each competition has their own pattern. So you get there and they tell you the pattern and thats when you know what you have to do.

I was really lucky, I also got chosen to be Teamster of the Year too, chosen by the judges and committee members. So I got an extra prize on top of the prizes, so it was really cool.

Michelle has been around horses all her life but has been working with Clydesdales for just a few years.

I grew up with light horses, and I got my first team of horses just seven years ago and then from there just started doing competitions. It was just some place to go to get together with other people that drive, and you learn things and have a good time and its a lot of fun. Like when youre around the people that enjoy doing what you do. It was really good.

What does she enjoy most about working with Clydesdales? Oh, their mannerisms, she says. Theyve just got such big hearts. They just do what you want them to do and try their best. My mares are amazing, they give me everything theyve got.

Its my therapy. Some people hunt or golf, that kind of thing, and I have my team of horses. When youre having a good day or a bad day, thats what you go do. Its my break from reality.

Michelle says she was happy to see how well another competitor originally from the local area, Amanda Van De Kerckhove, did at the competition.

Shes in Saskatoon now. She made the top six and she placed in sixth overall out of the 12 at the end of the two days. So she did really good, too!
Before this year, the best Newton has done in the competition is fourth overall.

I was tied for third, but because your pattern plus time, the other guy was slightly faster so I ended up in fourth and thats the best Ive ever done.

Ive won a few banners in the water race before, but never in the actual pattern. The pattern one is the hardest one, its the most stressful I guess you could say. The feed and the water race are more entertainment and fun, its not quite as stressful.

So Im very happy with how it went this year, I was really lucky!