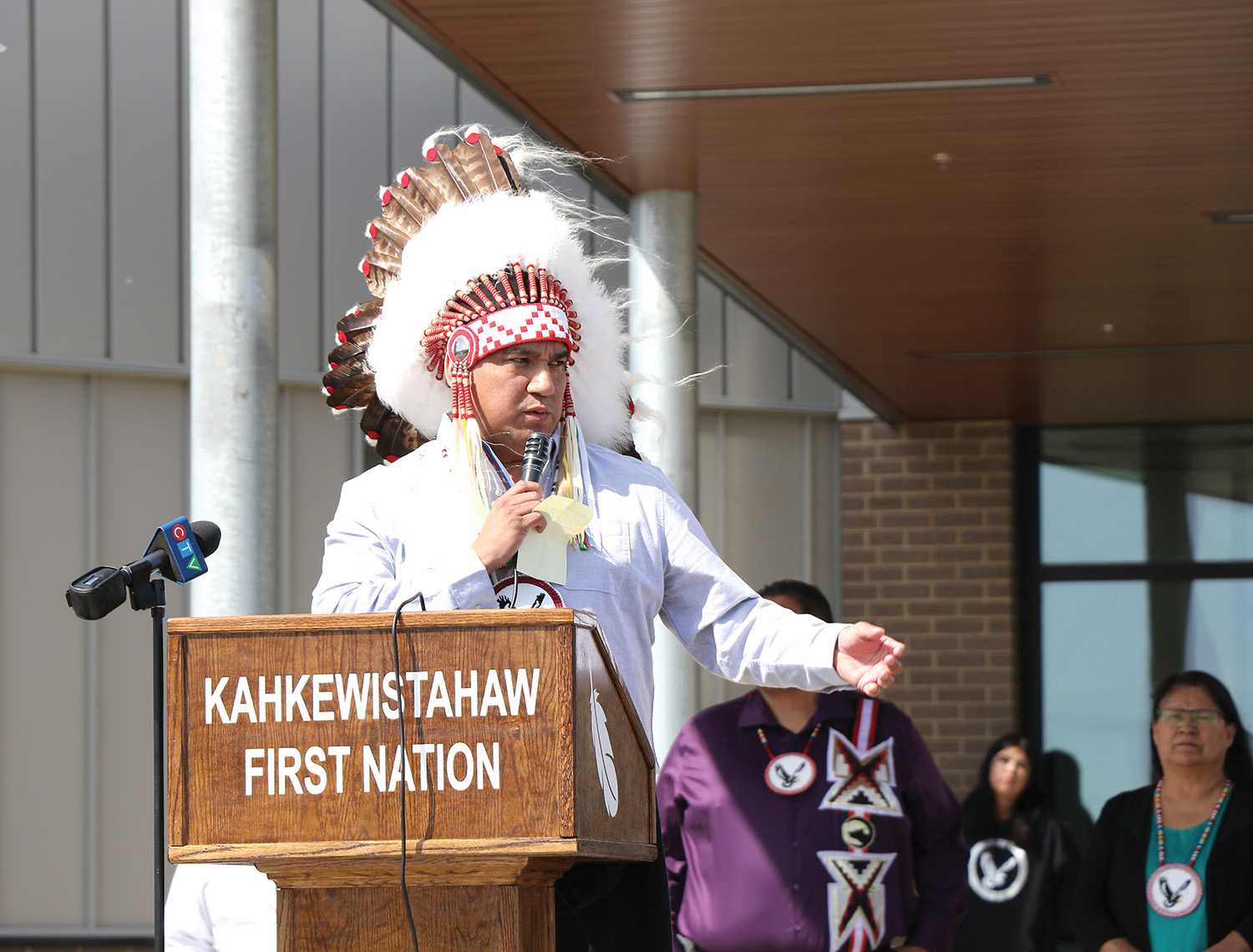 On May 4, the grand opening of the Chief Joseph Crowe Governance Centre took place at Kahkewistahaw First Nation. The $20 million facility is funded by KFN and took three years to fully develop.

The building is designed in the shape of an eagle, which came from the name Kahkewistahaw, which means eagle flying in the air, in Cree.

We set this centre in place five years ago in 2017, myself, and these four hardworking councillors who were elected, said Chief Evan Taypotat of Kahkewistahaw First Nation.

It took us a year to figure out what we wanted to do with the building, one of the things we talked about is working together. We want Kahkewistahaw to be a well oiled machine, and at that time we couldnt be because we were working in seven different buildings.

At the grand opening ceremony, Taypotat spoke about how important economic development is, for Kahkewistahaw First Nation.

I used to be an infantry officer with Princess Patricias Canadian Light Infantry (PPCLI) in Edmonton, where there are some of the toughest soldiers you ever saw and when they had an objective, they just got it done, but part of the reason we got it done is because the whole group was fighting under one roof, he said. 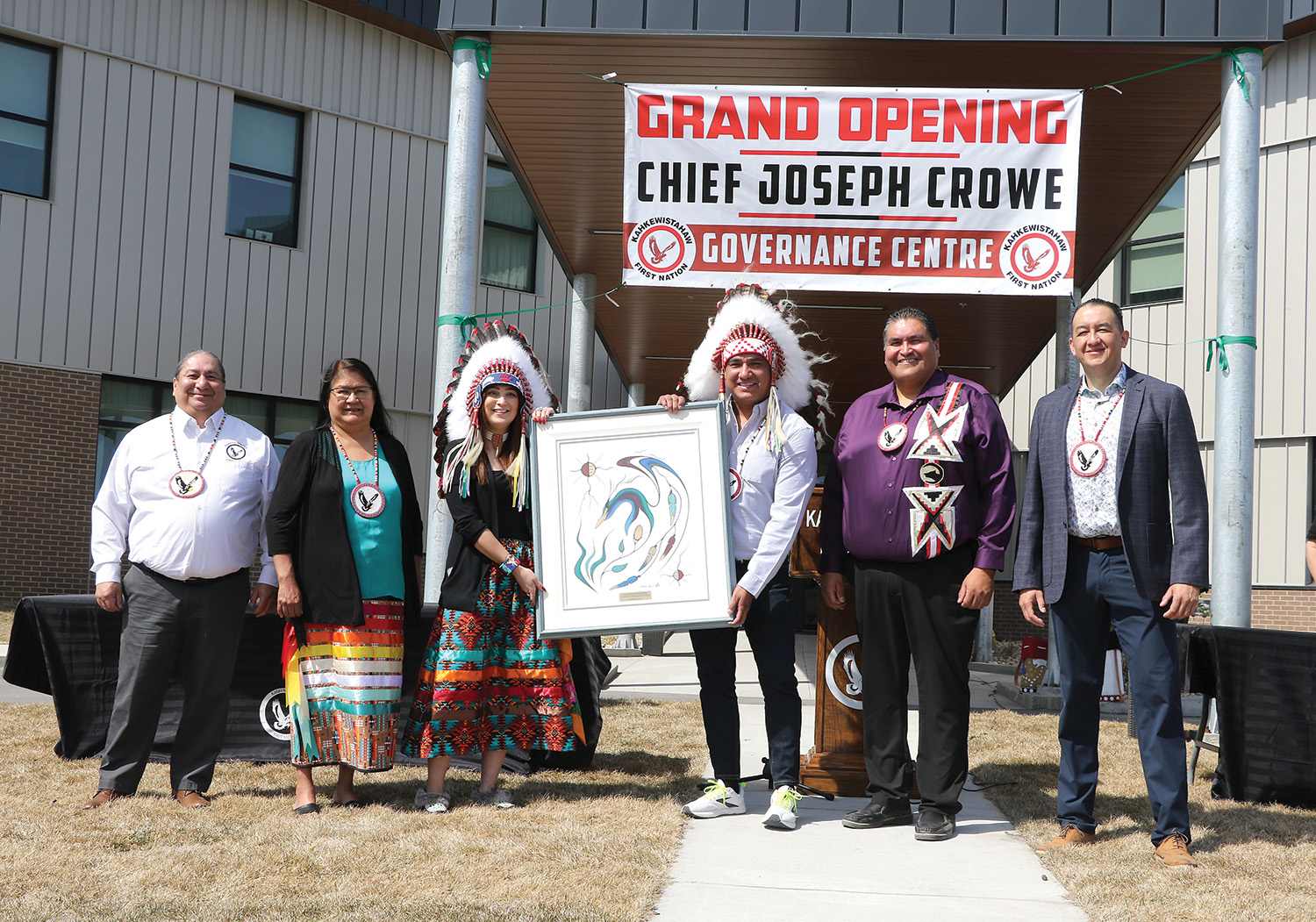 When we talked about going to Afghanistan and achieving those objectives, we did it well because we were under one roof. When I came back home and compared that to what we have here on Kahkewistahaw, we see the wants and needs for our First Nation to be better.

When I came back I said we have to be a better workforce, before we can become better for our 2,300 constituents and lucky enough, the four councillors behind me said lets do it.

We couldve built anything with $20 million, we couldve made more homes, more businesses and we said no, we have to secure our workforce, Taypotat said.

We need to make sure our people have a building that is top notch, like the Googles, the Amazons, the SaskPowers, because for so long First Nations Peoples always took a little bit, the least is all what we ever got from the government and that stops today with our workforce.

Taypotat thanked the corporations who helped with the building of the Chief Joseph Crowe Governance Centre.
Two people I want to thank is Dustin Braun from aodbt, who put forth the design, this building when you fly over from above its an eagle design, he said. 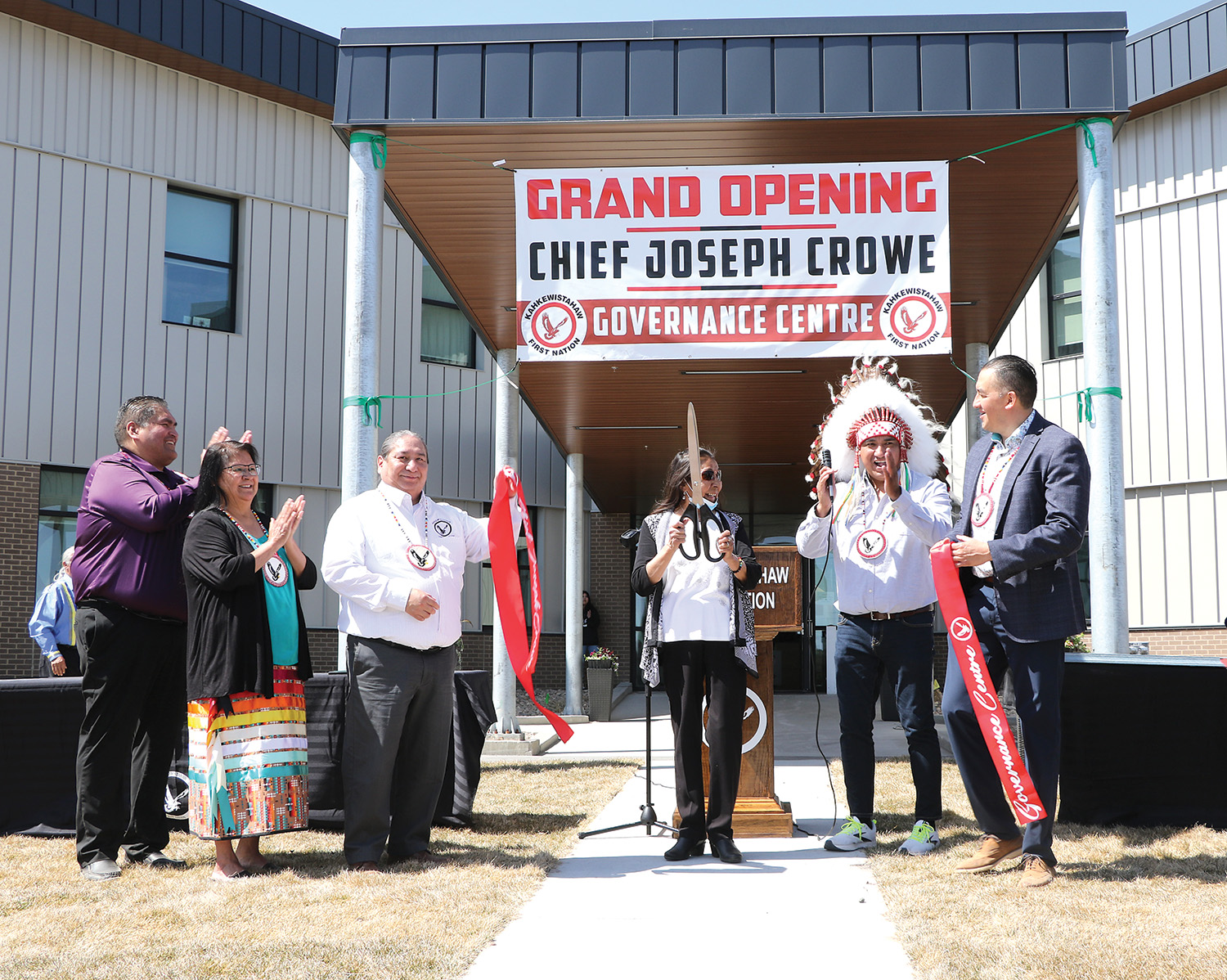 I also want to give Wright Construction a glowing review, Lorne and Daniel thank you, these are the people who helped put this in motion.

Taypotat spoke about the meaning of the governance centre and why KFN council, decided to name the building after the late Chief Joseph Crowe.

The next part of this centre was figuring out what to call this place, in an Indian country we honor people that have passed on, we honor people who have done services for our communities, and Chief Joseph Crowe was an easy one for us, Taypotat said.

Crowe served as chief from 1954-57 and 1961-65. At the time of his election, he was the youngest Chief in Canada, and worked closely with the founding chiefs of the Federation of Saskatchewan Indian Nations (now the Federation of Sovereign Indigenous Nations).

Crowe spent much of his life researching Treaty Land Entitlement (TLE) and Specific Land Claims for various organizations, laying the foundation for the advancement of many nations after TLE was signed in 1992.

After serving in the military, Taypotat returned to Kahkewistahaw and became the principal at the school. At the ceremony on Wednesday, he spoke about his expectations for Kahkewistahaw First Nation being similar to the expectations he had for students, during his time as principal.

I used to be the principal of that beautiful building back there, and our motto was people have to come here to learn in a fun and safe environment, and thats exactly what we did at that school, he said.

As long as Im in leadership, this building behind us will be a safe and fun environment for everyone.

Taypotat also spoke about the challenges that will arise at the Chief Joseph Crowe Governance Centre.

We have a $20 million building, now lets act like a $20 million staff. It makes no sense to have this world class building behind us and have minimal staff that brings minimal services. 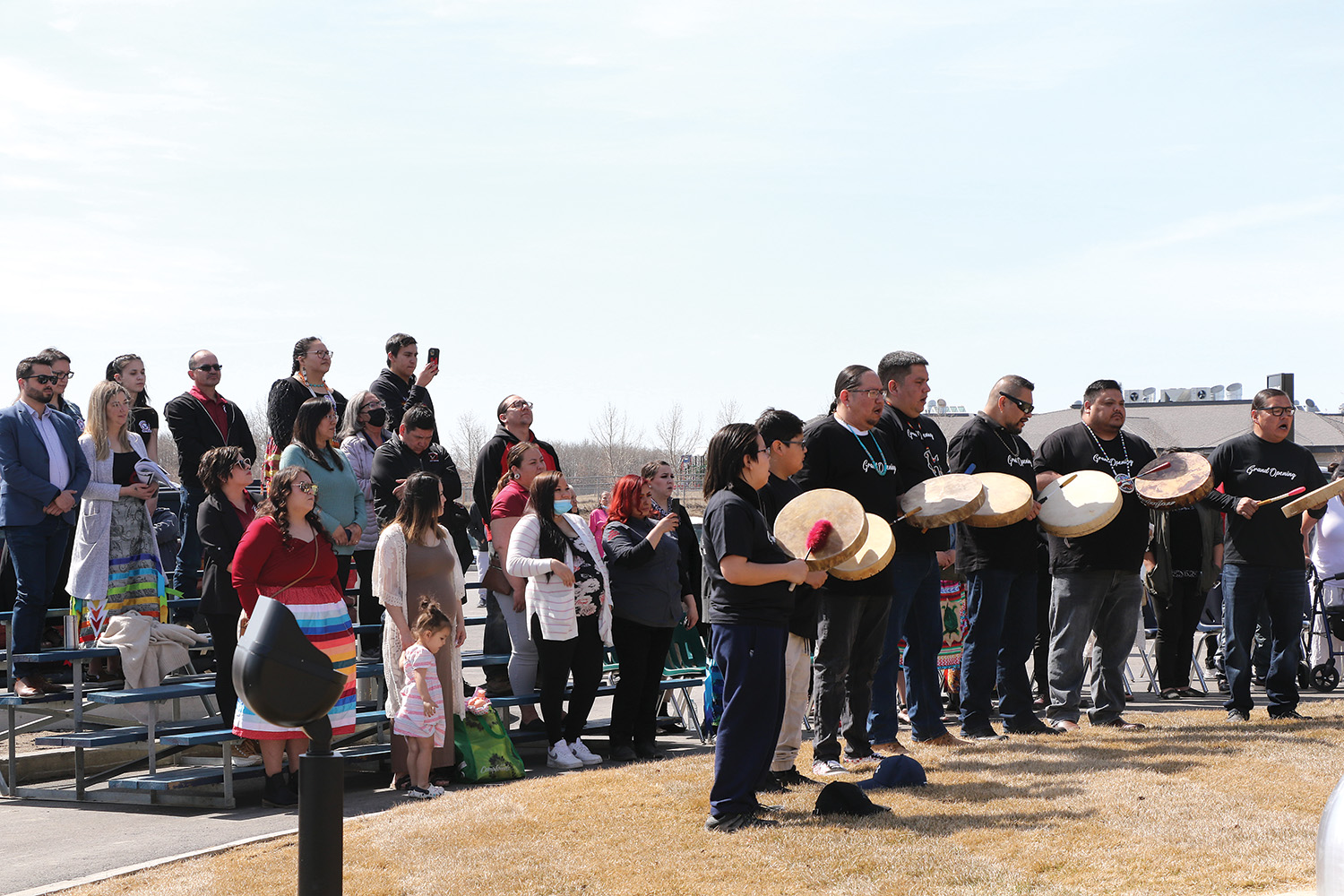 Wooden Face and Kahkewistahaw youth performed a Victory Song at the beginning of the grand opening of the Chief Joseph Crowe Governance Centre at Kakhewistahaw First Nation May 4.

Were doing a lot of things, but it makes no sense to build all of those things, if were not going to bring world class service, world class professionalism, so thats my challenge to our staff.

We have to bring those better services, we have to be better for our people and if we arent, lets fix it.

I also want to talk about change, people know that chief and councils change, trustees change, teachers change, they all change, what should never change is the expectations that our workforce should bring, Taypotat said.

Taypotat said the artifacts portrayed in the centre symbolize the history of elders from Kahkewistahaw First Nation.

I get emotional that day during the meeting with our elders, because I want our elders to know that we want to share their stories.

When I visit them in their homes, they have so many pictures and so many stories from way back, and I want those pictures in this building.

We need those pictures in this building, we need more, I want your stories. Everything we do today is for our elders and for our children. Our adult workforce, well get by because were strong, we grew up with tough love, but our elders, many of them have started walking the spirit world, and then our children are here watching us, so everything were doing is for them.

In the next couple of months, Taypotat talked about the upcoming projects KFN can look forward to.

Theres a lot going on for next year, the leadership behind me is very proactive, were tired, but we gotta keep going because were elected to go, were not elected to be status quo, he said.

The elders wanted a place where they can meet daily, were going to build them this beautiful meeting place.

He also spoke about building an arena, Operations and Maintenance Department, along with a fire department building for Kahkewistahaws volunteer firefighters.

Obviously were building 15 smaller homes right now, that will be ready to go in the fall, its been a difficult process because we want to build this community but, there has to be a method to the madness, he said.

Its amazing what a First Nation can do when people work together. 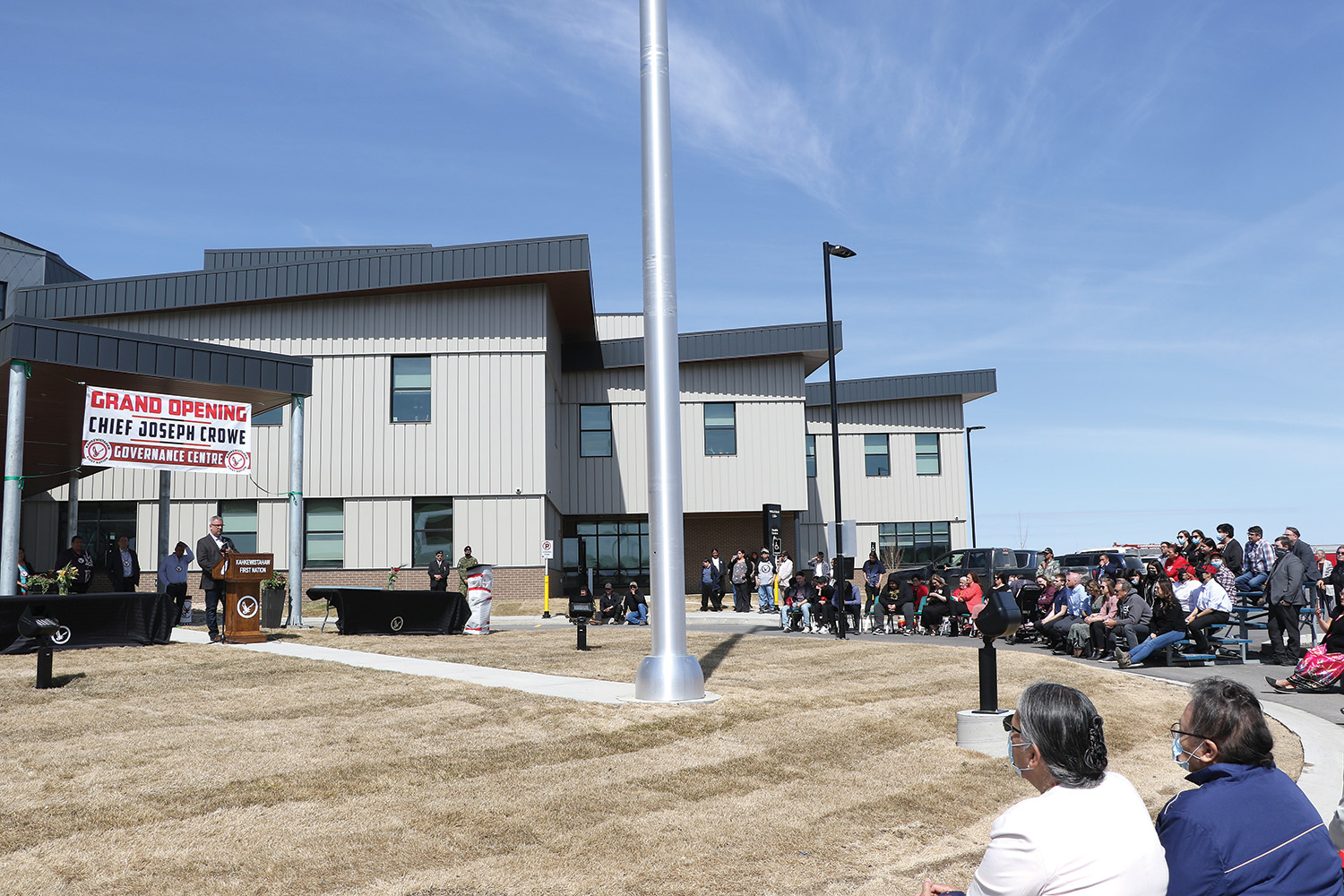