In Esterhazy - $2.2 million in upgrades announced for Dana Antal Arena 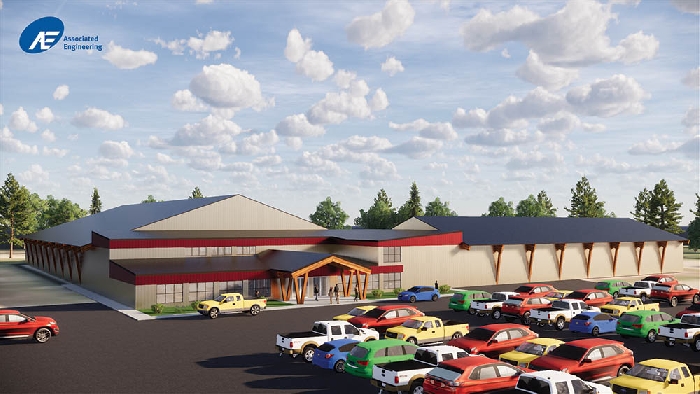 This digital rendering from Associated Engineering in Saskatoon show what the Dana Antal Arena upgrades will look like.

This is a long overdue project, were the words of Esterhazy mayor Grant Forster. This was in regards to an estimated $2.2 million in upgrades for the Esterhazy Dana Antal Arena and curling rink lobby areas.

The newly founded Esterhazy Recreation Fundraising Committee was the host of the Imagine the Possibilities Tasting Festival on February 9. This was the first fundraiser for the renovation plans with a goal to fundraise between $500,000 and $1 million for the project.

The Imagine the Possibilities event had the main purpose of unveiling the renovation plans. It also functioned as a fundraiser, with 200 tickets sold. Many local businesses in Esterhazy were supportive of the event by buying tables and providing sponsorship.

With spirits and appetizers, the attendees were able to enjoy their evening with sounds from All That Jazz from Yorkton and the comedic humour of Bob Beddow of Alberta. In addition, local MLA Warren Kaeding offered his congratulations and support on behalf of the Saskatchewan government and local MP Cathay Wagantall also spoke of her support for this future vision.

But, of course, unveiling the vision of Town of Esterhazy councillors Randy Bot, Tenille Flick, and Recreation Director Brenda Redman was the main event.

The town of Esterhazy has been working with Associated Engineering to create their vision. That night they released panoramic photos of what the lobby and second floor could potentially look like.

The renovation plans are to include one new main entryway for both the arena and curling rink, which would eliminate the wall between the two areas and add a second floor. There would be a new reception counter, that would function as a ticket booth and a centre hub for information. The goal is to increase seating to be able to accommodate demands and host larger events in the arena. Other key updates would include upgraded washrooms, a girls dressing room, a lounge and bar service, and an elevator and lift to have barrier free access.

Renovations would expand the lobby area to the south by 30 feet deep by 50 feet wide to make it a total of 3,300 square feet. The total estimated cost of the project is $2.2 million.

Additional fundraisers are planned, including a classic rock concert for August 31. The fundraising committee is also looking to apply and receive grants to support this venture. Esterhazy has also become a contender in the Kraft Hockeyville competition with desires to use that as part of their fundraising efforts if the town is a winner.

In the end, as Mayor Forster said, This will benefit everyone, from the smallest child, to our senior citizens and our community overall.