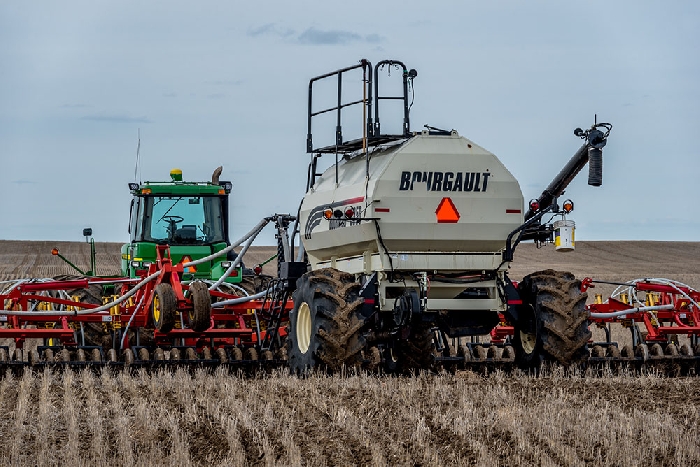 The Agricultural Producers Association of Saskatchewan (APAS) has come out with a study showing farmers will lose 12 per cent of net income to the federal carbon tax by 2022 and is requesting an exemption for agriculture.

The APAS costing review looks at all farming expenses including grain drying, transportation, heat and electricity, and hauling of crops off the farm.

The study shows Saskatchewan farmers will lose eight per cent of the total net income by 2020 to carbon tax.

In an interview with the World-Spectator, APAS vice-president Ian Boxall compared the impact of the carbon tax to employees losing 12 per cent of a paycheque and mentioned how farmers dont set their prices so they cant adjust for the difference.

Every other industry can pass that cost along. The carbon tax to get groceries to the grocery store affects the cost of groceries. The grocery prices go up, said Boxall.

We dont have the ability to pass those costs along. Thats the difference.

Because of this APAS is asking for an exemption for farmers.

Were asking for an exemption on the carbon tax that is incurred for agriculture production, said Boxall.

The carbon tax can change the future of farming in Saskatchewan with the cost being so substantial, Boxall said.

If we continue to see markets erode and go down and every year our expenses go up... I dont think farmers by 2022 can afford a 12 to 15 per cent reduction in net income, said Boxall.

APAS opposes the carbon tax as a whole because of the negative impact it has on their future.

Yorkton-Melville MP Cathay Wagantall said she has heard from a number of farmers about the impact of the carbon tax.

During the campaign I had a number of farmers contacting me and some that actually sent me their one month worth of costs for grain drying, and the added costs of the carbon tax was huge, so Im definitely glad to see APAS stepping up and speaking out very specifically about it, she says. Theyve done their homework, which is really good to see. You know they know what the costs are, and its hurting the agriculture industry significantly.

In the house as well, our shadow minister has brought it up on the floor saying the government isnt tracking or determining the cost involved to the agriculture field, and here we are. Here it is being provided to the government and we need them to step up and remove those costs retroactively and going forward, so we are putting as much pressure on it as we can, and of course this applies right across the country.

It has impacted Ontario farmers as well, so the minister has to look at the whole picture and realize the damage that is being done.

Agriculture is a significant industry across this country and they have kind of played picking favorites, choosing which large emitters theyre prepared to actually give complete exemptions to on the carbon tax, and yet our farmers and small businesses are being penalized, so it is a very unfair playing field.

We will keep putting that pressure on.

Wagantall said she is hopeful that with the minority parliament, the carbon tax issue can get more mileage in committee.

Were in a very different dynamic than we were when they had a majority government, but unfortunately they are taking their time in getting those committees up and going, she said. They should be starting this next week, but we have to wait for them to make an announcement and give us 48 hours notice when they are going to start processing.

We are already working on a lot of the resolutions that we would like to see. We are working with the other parties on our side of the house in opposition. We should come to an agreement on what we should challenge them on. You can see in the House of Commons our first three opposition motion days we have won. We have worked together on our side of the floor to win on those motions and that is a huge advantage with the minority government.

Were finding areas where as an opposition we have things in common that we can challenge the government on.

Does she expect to see any action from the government in response to the APAS study?

I wish I could say yes, that we are going to see that happen, says Wagantall.

I dont have confidence right now where we are.

We have a mining situation up in Northern Alberta that has been on the books already to approve for over eight years and that is coming up at the end of February. I dont have a sense of any change of heart really at this point in time towards western Canada and our economy and how we contribute to the food in this nation and the world and also the clean energy production that we do already across this country.

So I cant say Im hopeful but were certainly making an argument and we will work with APAS. Its very helpful when the stakeholders come forward and say very clearly what they want and what they need. It makes a big difference to how we can influence in the House of Commons, so were definitely going to go for it. There is no question.

Some of the things this government has done, like the carbon tax, just shows the incredible lack of either attention or understanding of the role the West plays. We have a smaller population base but we are crucial to the economic success of our entire nation and we dont seem to be able to break through.

Wagantall believes there are things Western MPs can do to push for the agriculture exemption APAS is seeking.

Absolutely as a Saskatchewan Caucus now we are doing that across the board with the ministry and with our opportunities with the committee when we get to form our committees will be hugely important to impacting those decisions.

They will bring the minister to committee and we will have control in the dynamics of the conversations that take place there and just weigh more heavily on them to do the right thing and give us some relief when it comes to this tax. It is absolutely unfair to our farmers.