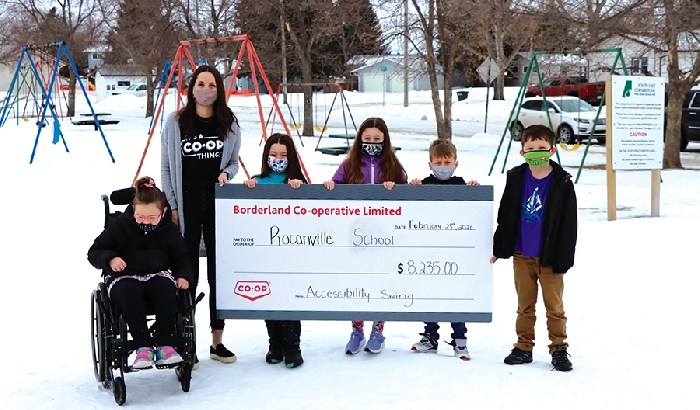 The donation was a result of Nutrien purchasing a considerable quantity of gift cards for their staff to use at Borderland Co-op locations which in turn allowed Borderland Co-op to make a donation to Rocanville School.

Rocanville School student Sofia Laidlaw is a wheelchair user and the school staff wanted to make sure she would be able to participate in playground activities as she grows older.

Its actually a two-year project in the making, said Rocanville Principal Nathan Bromm. We have a swing for her right now, but shes just outgrown it and for the safety of her and teachers and EAs we needed something bigger. We started investigating it and CNIB recommended an appropriate swing."

This one will have seating for her and her wheelchair and it has a ramp so she can just be rolled onto it and she wont have to leave her chair. It also has two seats on the side so that friends can sit with her and its more inclusive that way. When we saw there was those kinds of options out there we thought it would be a good opportunity for her. Plus with the playground, nothing is really wheelchair accessible other than a ramp platformwe did have that when we built the new playground a couple of years ago to ensure she had something."

The main reason is for Sofia right now, but we have other intensive needs students that will benefit. It was more about what can we get for Sofia that gives her an opportunity on the playground to play with her friends, as well as, not have staff lifting her and being worried about injury to them or her. So thats where the idea came from.

Receiving such a large donation from Borderland Co-op has accelerated Rocanville Schools swing project with the funds accounting for over half of what the school needs and theyre optimistic local donations will cover the rest.

Its huge because the swing are incredibly expensivetheyre about $12,000, Bromm said. To get a donation like that really helps. Were doing a little fundraiser with the town where the town is matching personal donations as well and giving tax receipts. So we still hope to see donations coming in, but with this donation it basically allows us to order it and hopefully we get enough to fill in the rest. This is good for the community.