Kihew Fabco a step on the road to economic independence 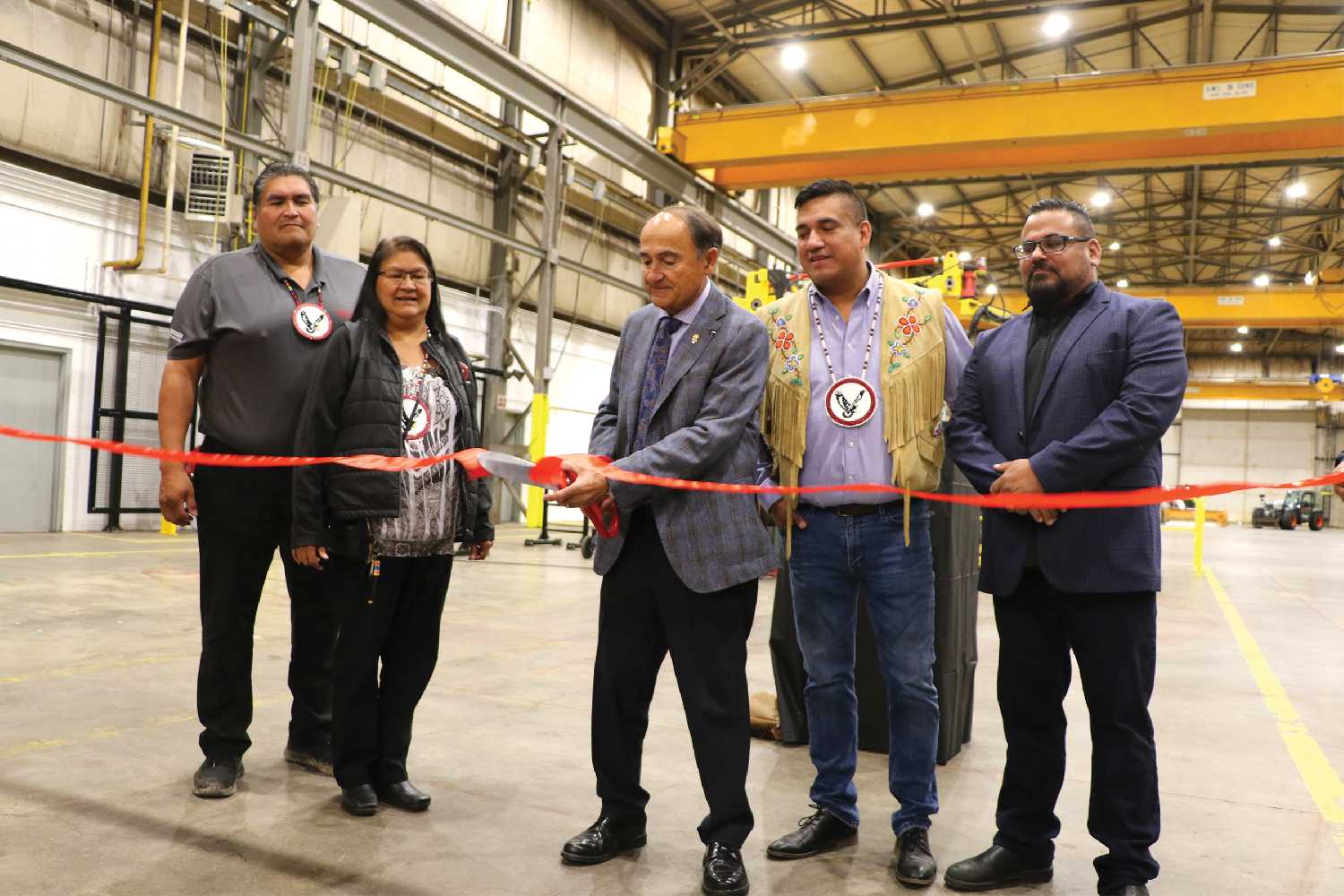 The Kahkewistahaw First Nation has taken another step to economic independence with the opening of Kihew Fabco, a metal fabrication company that specializes in welding, engineering and design and 3-D modelling services.

Kihew Fabco is operating out of the 55,000 square foot former Babcock-Wilcox fabrication building along Highway 10 in Melville. Kihew Fabco is a fabrication company that specializes in welding, engineering and design and 3-D modelling services.

In 2019, the Kahkewistahaw First Nation, which owns half of Kihew Fabco, purchased the building.

Kihew Fabco uses an integrated fully automated fabrication process complemented by a digital data-management infrastructure including 3D laser scanning of project locations to aid with project conception and development, along with CAD design and drafting of concept models, capable of working closely with industry engineering and converting a 3D scan model to a fully workable fabrication model to be implemented into an automated welding workflow.

I started out in the trades, working the operations, I was a pipefitter. The trades helped me. Im really excited to share that with my community and build a legacy for anyone young who wants to get into a trade and build a career.

This has been a really good journey for us and Im really excited. I want to thank everyone with our team at Kihew.

This is a historic moment for Kahkewistahaw First Nation, to become a part of the economic activity in Saskatchewan. We work with a lot of the local industries. We have the potash mines, theres oil and gas in the south, agriculture, and when First Nations business becomes part of that supply chain, its a very important time and were very excited about that.

Kihew means eagle, and we chose that as our logo. The eagle represents strong, vibrant First Nations communities. It represents achieving our highest dreams. This represents a great big step in the right direction for young people, for indigenous workers, for non-indigenous workers. We want to give our young people a place to move into the future. Our goal here is to be an industry leader. We offer high quality services, piping and structural steel fabrication, 3D modelling. We want to work with local industry, and industry across Saskatchewan and Western Canada.

Kahkewistahaw right now is looking for sovereignty, he said. We want to be sovereign, we want to be independent and we dont want to depend on anybody.

Were going to do that through economic development. If we can make money to look after ourselves, Kahkewistahaw will prosper for years and generations to come. This is one of the smaller steps of about 10 steps we have planned and certainly a step in the right direction for us.

We have a five year plan, we have a 10 year plan. Right now its all driven by elections and its driven by people staying in these seats that have the same vision, but for us right now the land in Saskatoon that were developing and the land at Birds Point were going to develop in conjunction with this land are part of the bigger solution to all the underfunding.

We all know about housing shortages and housing crisis and lack of education funding, but like I said we can either wait for the government to change their colors, which theyre not, or we can do something about it and Kahkewistahaw is doing something about it through economic development.

So how did this project come together?
Three years ago Des Dumais was driving by on a really cold day and he saw this place and he came in here and he said Hey they made steel here before. Thats what I do.

Des Dumais is a band member and he said Lets buy the building and lets make our own custom steel fabrication plant. He said We dont want to be partners with anyone. We want to be 100 per cent indigenous owned. And he said owning it, were in charge of our own destiny, our own fate and that is where we wanted to get. So it was three years of a lot of meetings, a lot a airplanes, planes, trains, beating on doors.

Covid-19 has basically stalled a lot of the industry but now as were coming out of Covid-19, industrys opening up again, people are building more things and there are more contracts, and so and so forth. So basically we just have to make sure we clear Covid out. I dont think well ever be rid of it but in some aspects right now were moving beyond it as best we can and with that comes more business.

Chief Taypotat said Kihew Fabco will help his First Nation on its drive toward economic independence.

Kahkewistahaw will be sovereign one day because of economic development, he said.

Kihew Fabco will help achieve that status and achieve that goal for us, as will other businesses that we have in Saskatoon, Yorkton and other cities that were looking at right now.

Kahkewistahaw purchasing the building and setting up a steel fabrication plant. This is very good news for Melville. We had a good run with Babcock-Wilcox but now Kihew is taking over.

Theyre a very progressive group of businesses. Their equipment is just unbelievable, robotic machines and suchthis is so new to Melville.

Theyre certainly gearing up for future production and allowing Saskatchewan to benefit, allowing our country to benefit by the things they are doing.

They have very strong initiative and their equipment and technology is right up with the times. When we talk about robotics and technology, its all here. So were looking for some very good things, to happen in terms of employment, and good things to happen for Kihew Fabco and for the city of Melville. This is good news and we welcome them to our community.

He said Babcock-Wilcox was an important part of the community when it ran the plant before closing it several years ago.

That was a very, very big part of our economy, he said. They provided a lot of the equipment for the potash industry. So we are very pleased to have the plant back and wish the new owners all the best. 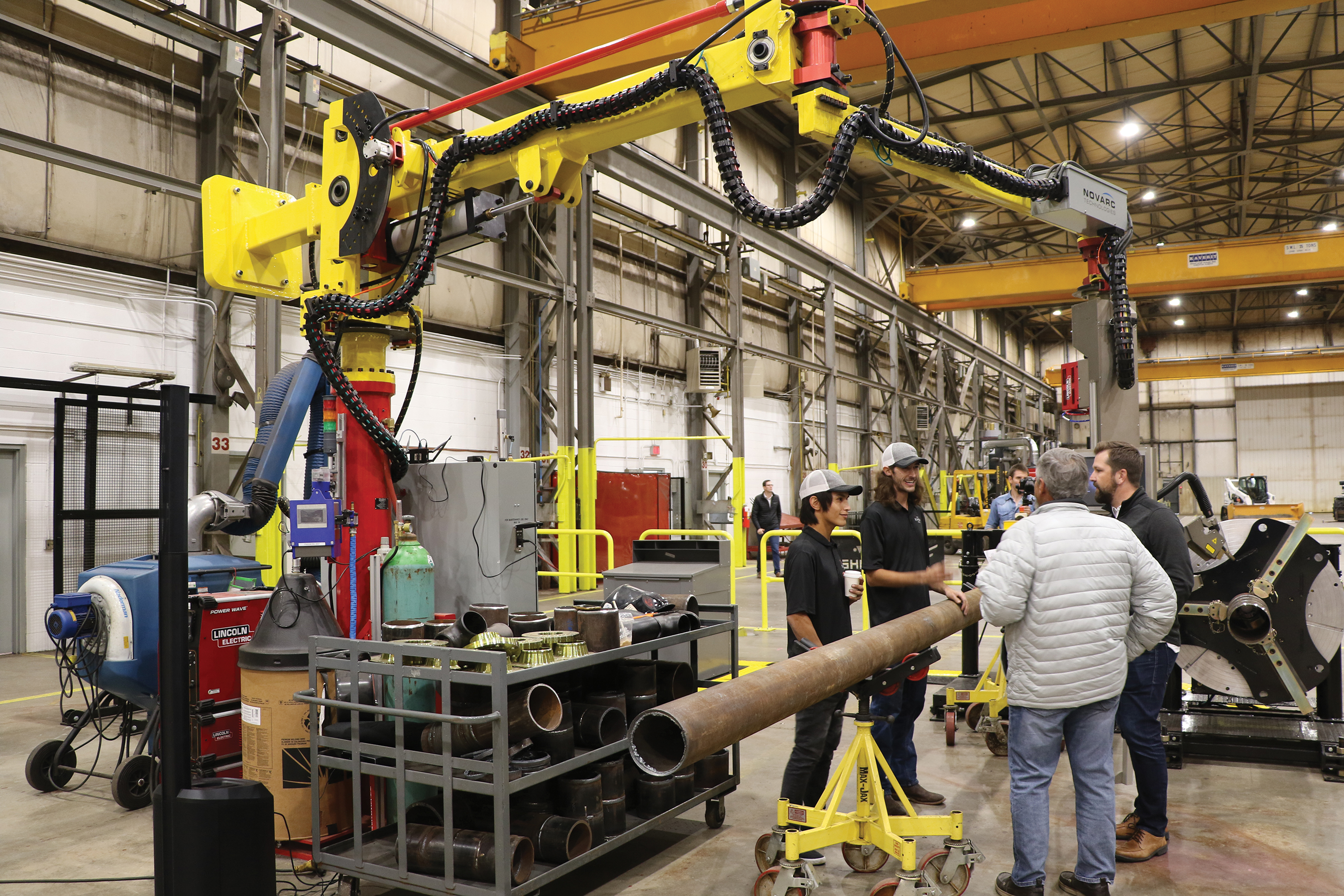 People touring the Kihew Fabco building at the grand opening on Wednesday."/p>