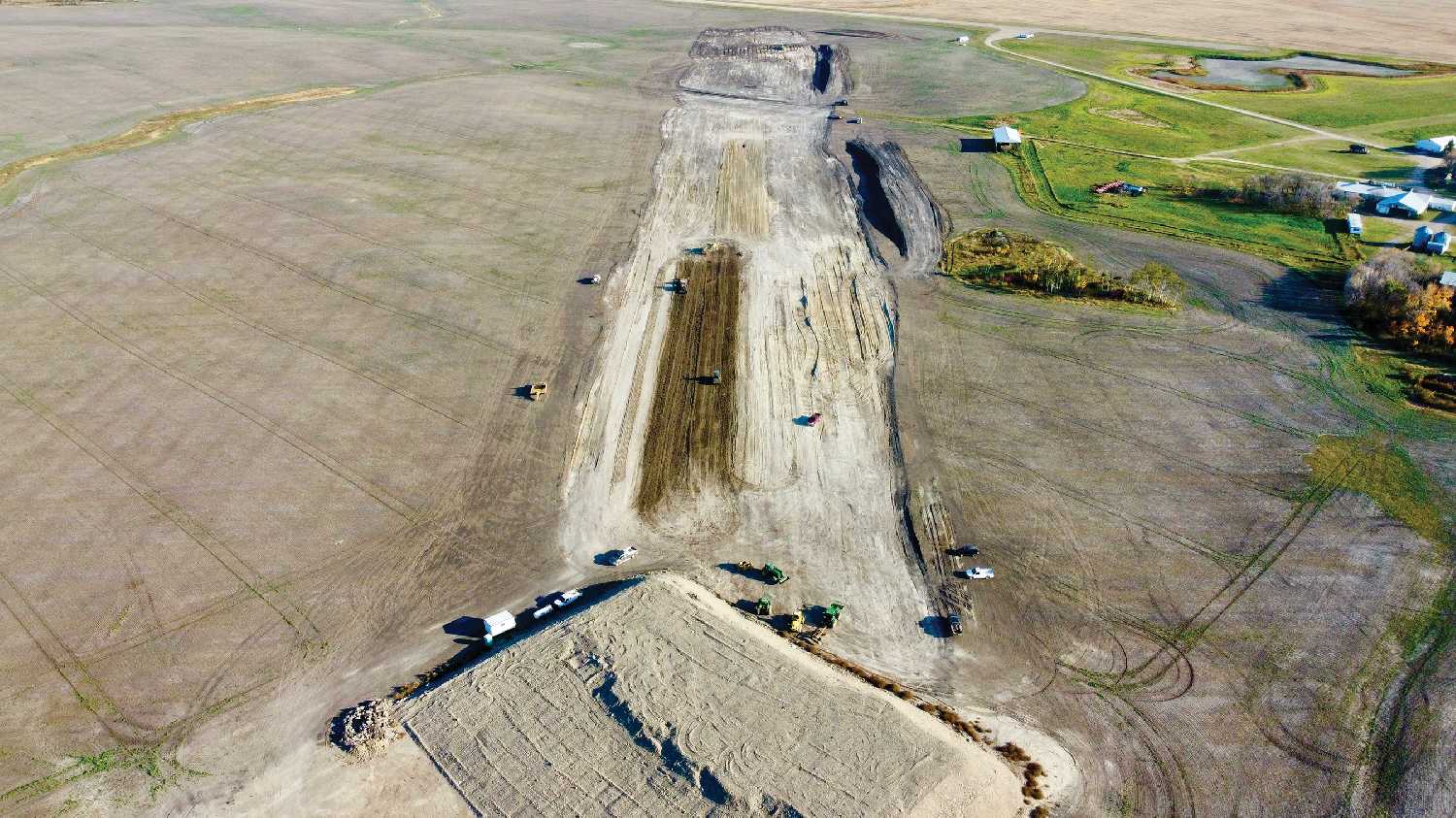 Work on the new runway at Moosomin airport is well underway.

From the air, the work being done around the Moosomin airport is unmistakable.

The ground is being levelled in a swath 225 metres wide and 900 metres long.
Construction on the northern portion of the runway began on September 7 with the stripping of topsoil by the RM of Moosomin.

During the week of Sept. 20, several other municipalities and businesses got involved.

The RM of Moosomin, RM of Silverwood, RM of Martin, RM of Wawken, Town of Moosomin, McMullen Farms, Hebert Grain Farms, Flaman Sales, and Borderland Co-op all contributed equipment, supplies and/or labor to the construction effort.

During the week of Sept. 27, the RM of Moosomin, RM of Silverwood, RM of Martin, RM of Walpole, RM of Ellice-Archie, Town of Moosomin, McMullen Farms, Hebert Grain Farms, Flaman Sales, and Borderland Co-op all contributed either equipment, supplies and/or manpower to the construction effort.

The week of October 4, the RM of Moosomin, RM of Maryfield, RM of Martin, RM of Ellice-Archie, Town of Moosomin, Hebert Grain Farms, Flaman Sales, Borderland Co-op, and Finning-Regina will be working together on the project.

The municipalities and businesses have either supplied equipment or supplies or manpower, and in some cases both. Each organization will provide the airport fundraising committee with a final costing of the time that their equipment or men were working at the site or final total of supplies provided. These will be received and compiled into a grand total once the project has ceased for this construction season.

Burns Maendel, the engineering firm that designed the airport project, has had an engineer and an on-site field services manager ensuring that the design parameters are being met and compaction is meeting the standards.

As of September 30, 3,000 feet has been stripped of the northern portion of the new runway. The construction has to stay 330 feet (100 meters) back from the existing runway so that no conflicts occur.

The clay placement and the continued packing has resulted in 500 feet of completed runway length, with another 1,000 feet well under construction and will be completed in the next few weeks.

The intent with the warm fall weather that is forecasted is to keep working towards having the full 3,000 feet of the northern portion of the runway completed to the design plans.

The plan is to continue constructing the full 3,500 feet, so that clay and packing is considered complete, says RM of Moosomin administrator Kendra Lawrence.

1,500 feet is in stages of construction. 500 feet is near completion as per the engineer. The additional 1,000 feet is still receiving clay and packing work. (These lengths are covering the full width of the right of way.) 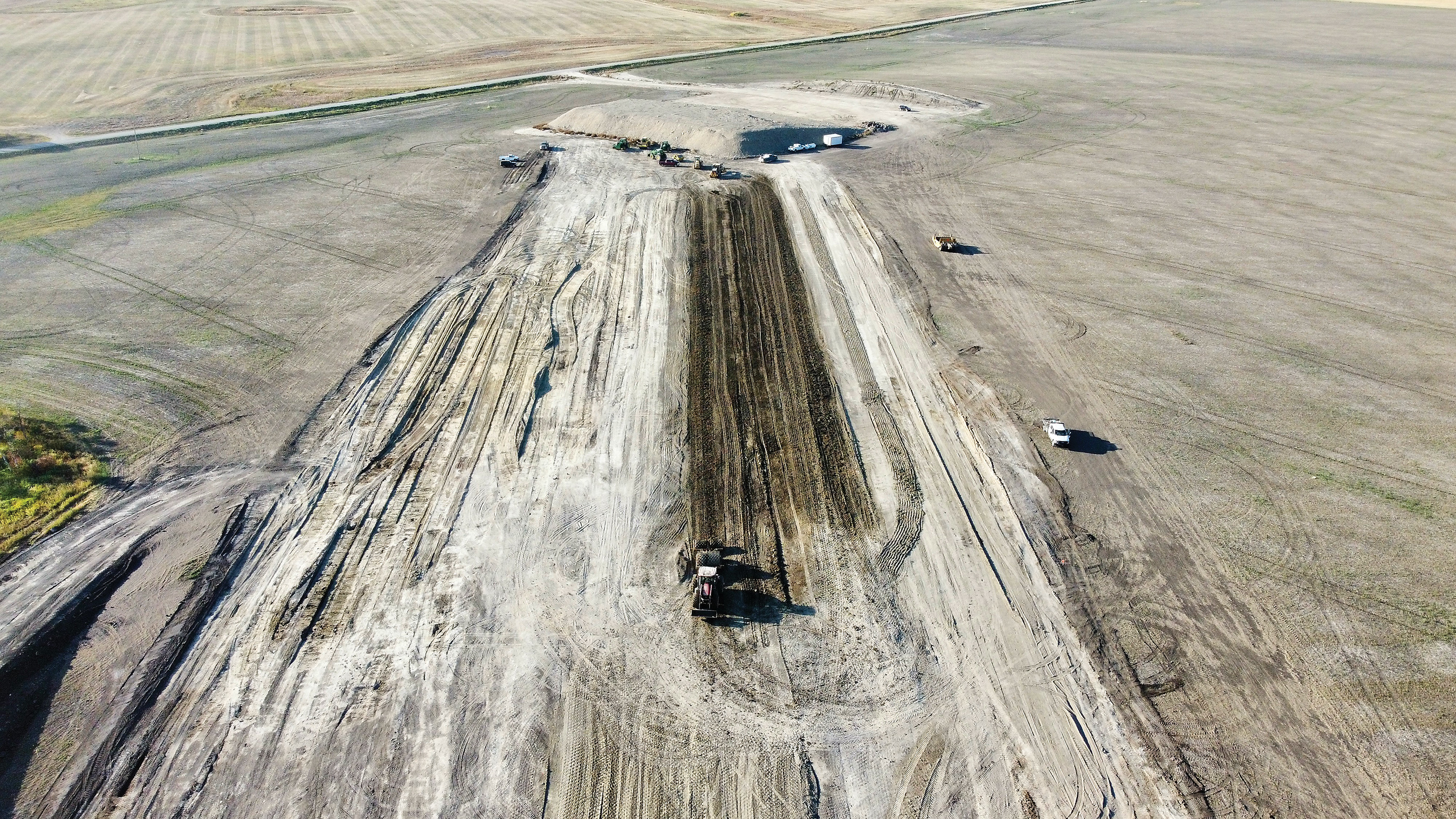 Work on the new runway at Moosomin airport is well underway.

The committee continues to look for further donations to the project. The McNaughton SRC contributed $1,000 to the project last week and groups have indicated that more donations are on the way.

Airport update at October Chamber meeting
The committee will provide an update on the airport expansion project at the October 19 Moosomin Chamber of Commerce meeting set for 11:45 am at the Canalta Hotel.

In addition to the airport update, there will be a presentation on Age Friendly Moosomin, and the owners of some of the new businesses in Moosomin will be at the October chamber meeting to introduce themselves to business owners.
Tweet