Unclear which department is responsible 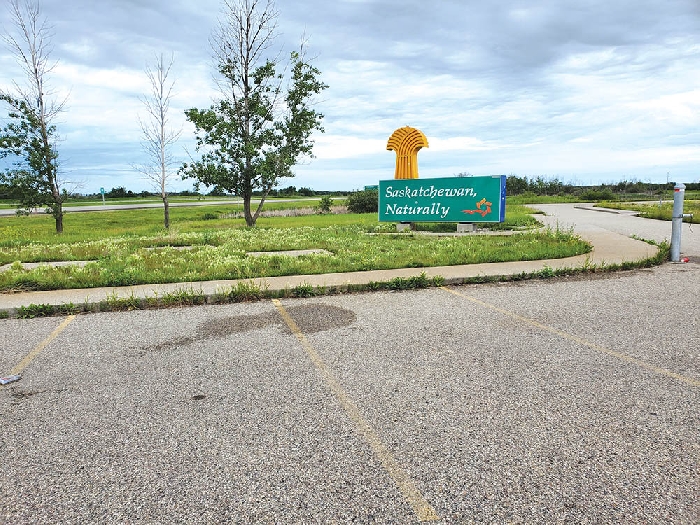 Trevor Green says he is upset with the lack of maintenance by the provincial government at the entrance to Saskatchewan on the Trans-Canada Highway. When the World-Spectator contacted the province about the concerns three different departmentsHighways, Parks, Culture and Tourism, and Central Services, said a different department is responsible for the site.

When you enter somewhere, youre usually greeted with some sort of welcome to let you know youve arrived or to empower you to stay. Sometimes this is a lasting first impression.

The Saskatchewan provincial entrance on the Trans-Canada Highway has seen better days, with the current state of it being less than satisfactory to the people who call the province home.

Many people take pride in their individual communities within the province and see the province as a whole as one big community, which leads them to question why more effort isnt being put into the welcoming area of such a community driven province.

Trevor Green, a Moosomin resident, noticed how little work has been put into maintaining the Saskatchewan provincial entrance despite it being the first welcome into the province and a hot spot to stop for a picture.

For years when the building (tourism information centre) was there it was a well kept neat and tidy place, said Green.

I go to Manitoba quite a bit and probably 40 per cent of the time you drive by during the summer time theres a car parked there with people taking their picture in front of the sign. Now its full of weeds and the grass is long and it just looks like a mess.

Manitoba has kept their entrance in better shape than Saskatchewans current area and that puts a punctuation mark on how badly something needs to be done, says Green.

If you look at Manitobas entrance, theyve got one when you first go into Manitoba that used to be their tourism information centrethen they built the big one in Kirkellawell, they still maintain their old one, he said. Theres recycling bins and garbage cans there and then you go to ours and theres paper cups and stuff laying everywhere. Its like we completely forgot about it.

Lets say its somebody from New Brunswicks first time into Saskatchewanand the thing is with Covid-19 how many people might be planning to tour Canada instead of going somewhere elseand this is the first impression were going to give them? This mess weve got? I wouldnt think it would take much to spray the weeds, cut the grass, and do something with the area.

I know it might be out of the way for them to take a little care of it, but it is the entrance to our province, he said.

Its the first impression of the province. People are going to take those pictures back and have those, and yeah they get the Saskatchewan sign in the picture, but then theyve got foxtail and thistle all around their feet. How does that look forever?

This is the first part of Saskatchewan people will see when they enter the province so why isnt their more pride being put into giving a lasting impression, asks Green.

Sure, closing the tourism information centre made some sense with 90 per cent of people getting their information online today, he said.

Having the building there was nice, but its kind of the wave of the future. But still I feel like you need to maintain the site even if the building is gone. Manitoba looks after their old one and they keep it well groomed. They cant spend $2,500 a year to cut the grass and spray the weeds here?

I was legitimately surprised. Last year it looked bad and this year it looks worse. Last year I thought maybe they forgot about it and theyd get it on the list and maintain it later.

Then I drive by the other day and I had to take pictures of it because somebody has to do something to bring attention to this. Maybe somebodys supposed to be doing it and theyre just not doing it. Who knows.

The Ministry of Highways then tried to connect the World-Spectator with the Ministry of Central Services, but received no information.

When asked which ministry is responsible for overseeing the Saskatchewan provincial entrance, no clear answer was provided.

RCMP are looking for information on the location of Steven Lundle in connection with a theft from the RM of Pipestone south of Virden. In Septembe...

Moose Jaw police kill cougar after tracking it with drone

The Moose Jaw Police Service says officers found and killed a cougar Monday night, after two confirmed sightings of the feline in the city earlier i...