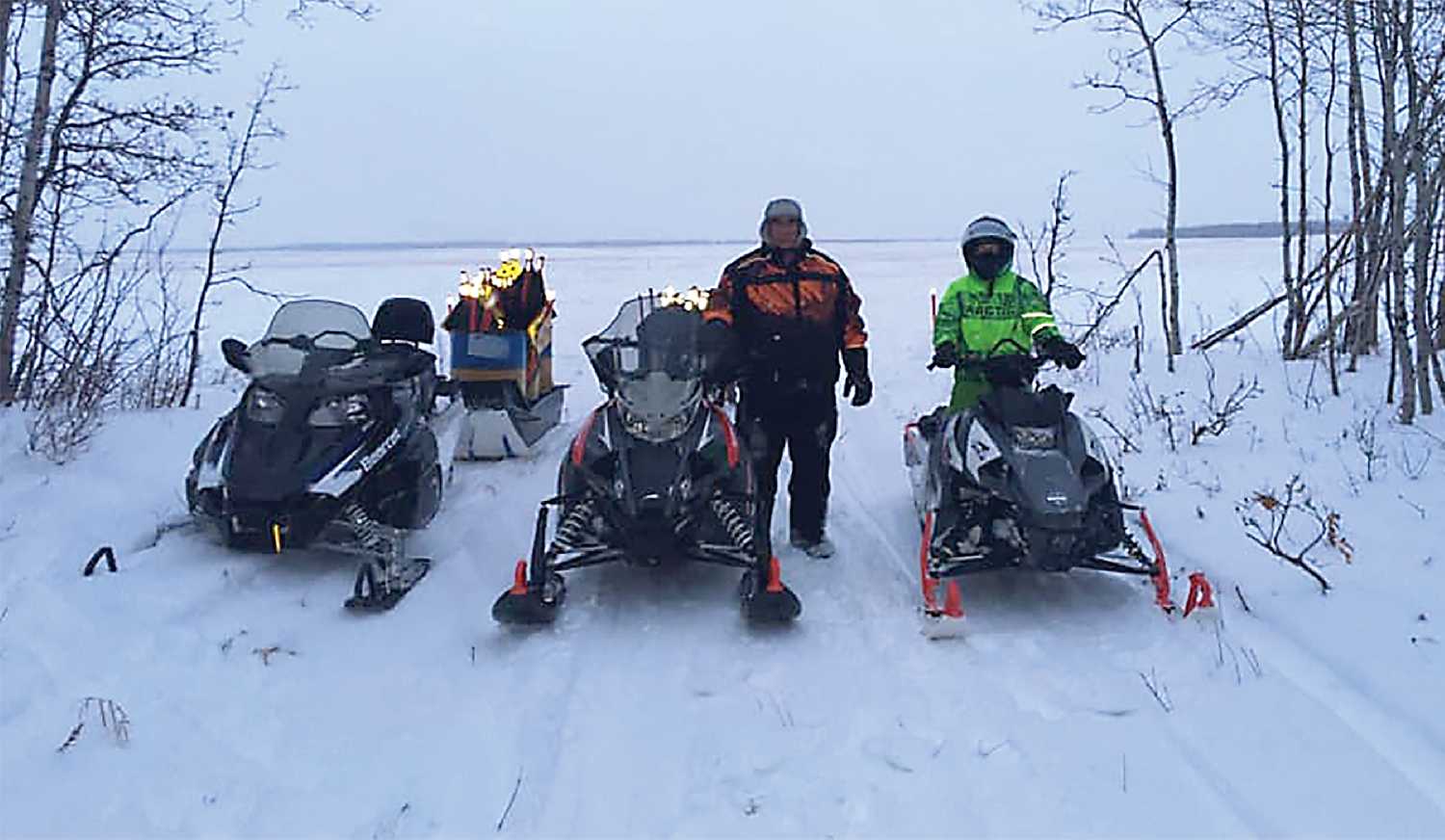 Snowmobiling through the Tri Valley Trails, Stan Langley and his grandson Gavin Palmer had the chance to enjoy the different paths within Southeast Saskatchewan and Southwest Manitoba. Along the trails, there are stations for individuals to fuel their snowmobiles or warm up at a shack.

In order to give local snowmobilers designated trails to ride through, volunteers from the Tri Valley Trails snowmobile club have groomed about 100 miles of snow trails across Southeast of Saskatchewan and Southwest Manitoba.

Stan Langley, the president of The Tri Valley Trails Snowmobile club, says individuals do not need to have a membership to ride the trails, but buying a membership is a great way to support the trails system and the club.

A membership costs $50 and helps fund the grooming of the trails. Individuals can purchase memberships at Universe Satellite in Rocanville.

We try to get as many people to join as a member and pay the $50. Plus, that person who goes snowmobiling on the trail, they dont have to be a member of the club to go on the trail, but they have to have a licensed snowmobile. When they license that snowmobile, they get access to the trail system, Langley says.

Langley says a lot of hours of work goes into grooming and setting up the signs for the trails.

Theres literally a thousand stakes out on the trails, those stakes all have to be put in and taken out, plus you have to buy all of the signs to put on them. The signs have to be reflective signs and theyre expensive, theres a lot of money that goes into it, says Langley.

The Tri Valley Trails are designated Saskatchewan Snowmobile Association (SSA) trails and although theres no cost to ride them, snowmobilers are required to register their snowmobiles before riding the trails.

As soon as individuals license their snowmobiles, they are granted access to ride the trails that are groomed by the Tri Valley Trails club.

Langley says snowmobilers in Saskatchewan benefit from the license because riders have access to trails in the province, in addition to trails in Manitoba.

There are multiple different trail paths that snowmobilers can take, trails that go from Rocanville to Moosomin, Fleming to Welwyn, Tantaion to Esterhazy and so on.

For the last two years, Langley says the club was not able to groom trails because there was not enough snow.

Weve actually gotten more snow this year to work with, then what weve had in the last two years. Hopefully we can get more trails done, he says.

The last two years the snow hasnt been good and weve only been able to open only a small portion of our trails. We were unable to go to Moosomin last year because lack of snow, and we were unable to do the Spy Hill loop due to volunteers.

Because the snow is heavy enough this winter, Langley says its going to be a nice season for snowmobilers.

Were hoping to branch off the Moosomin trail and run over to Welwyn, then from Welwyn to Rocanville. Then once were at Tantallon from Rocanville, well connect to the Esterhazy trail, and then the Melville, then Yorkton and so on, its endless where you can go, as long as you get the snow conditions to do it.

Langley says the club used to do trails all the way from Spy Hill to St. Lazare, however because they were short of volunteers this year, the club was not able to groom as far as St. Lazare.

We used to run all the way from Moosomin Lake all the way to Spy Hill, then over to Tantallon and then up to the Hilton, to the shack and then back to Rocanville, he says.

But to St. Lazare from Spy Hill, were not going to be able to do that. Youve got about 10 or 15 board members, those are the people doing the work on the trails. Some of these guys are in their 70s and we just cant manage to do it all on our own. Unless theres more help that comes out, to help do signing and stuff like that, running a groomer is not a hard job, but putting the signs up and taking the signs down, is hard work.

Langley says the club is active on Facebook and volunteers can follow their posts to see when they are in need of help.

Were always looking for volunteers, if anyone is looking to volunteer they should just phone our shop (Universe Satellite) or email us. 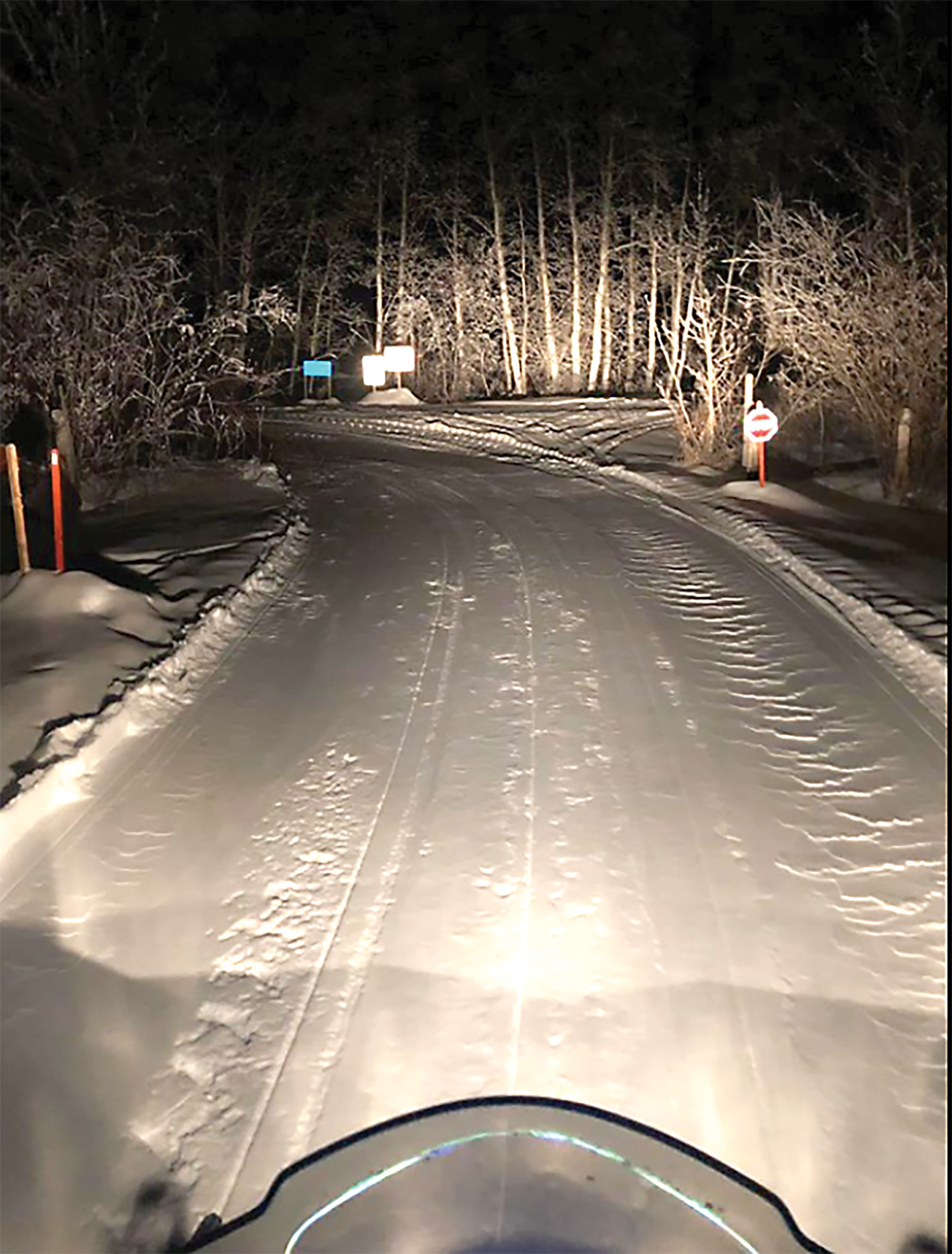 Youve got to maintain those snowmobiles, we bought new sleds to carry all the signs in when grooming the trails, those have to be modified as well, he says.

Those are all things being done through volunteer hours. We do it because we enjoy snowmobiling, everyone whos doing this enjoys snowmobiling, and thats why theyre doing it. We just have to get more people on board, to do it.

Langley says buying a membership helps contribute to the Tri Valley Trails club. However, snowmobilers can also contribute to the club by donating what they can at warm-up shelters, which are located along the trails.

He says with all the hard work put towards the trails, hes excited for local snowmobilers to have safe paths to ride on.

Since the pandemic started, Langley noticed more people purchasing snowmobiles and picking it up as a new hobby.

With Covid, more and more people are getting into the snowmobiling part of it, and the quadding, and stuff like that. If you can have nice and safe trails for everyone to ride on, it helps people get into it.

Theres a lot of people that have never rode snowmobiles but who are getting into snowmobiling now. If they can get onto a marked trail, then they know where theyre going. With the new trespassing laws, you just cant hop on your snowmobile and go rip wherever you want to anymore unless you have permission. The nice thing about having the trails is that those are all signed up with permission from the land owners.

Individuals are able to follow the tracking system on the SSA site, in order to see when the trails are in the green and ready for snowmobiling.
Tweet