Cat returned to Redvers by trucker after riding into the U.S. 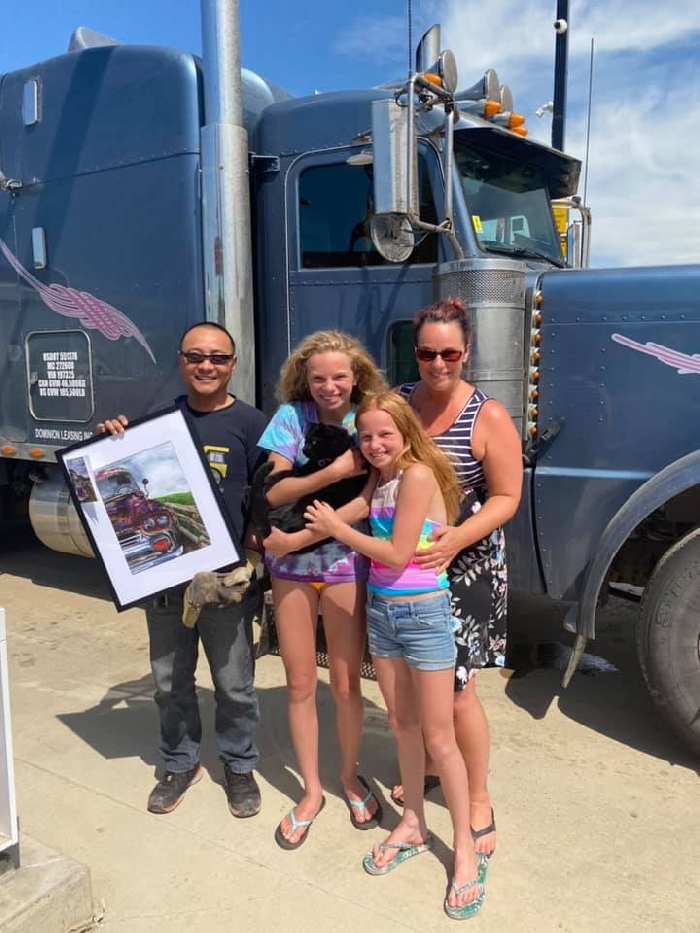 Trucker Jack Shao with the painting gifted to him by Chylisse Marchand, along with Marchand and her daughters Shay (holding Spooky) and Alli.

Spooky the Cat found out that the Canada-U.S. border is still open for cats. In an act of kindness, a semi-driver found a cat under his unit in Tioga, North Dakota, called the vet clinic in Redvers with the information on the tag, then drove back to Redvers to return Spooky to his home with Chylisse Marchand.

Marchand says she was floored by the generosity of the driver, Jack Shao, who works with a trucking company out of Manitoba.

She says she knew something may have been wrong when Spooky didnt come inside the morning after spending the night outside with her other two cats on Wednesday, July 22.

Ninety-nine per cent of the time they come inside at the end of the night, but it was such a beautiful evening on Wednesday that they wanted to stay outside, she says. Most of the time they just stick to the yard.

But on Thursday morning when I woke up around 6:30, my other two cats came running and Spook didnt.

He is my daughter Allis cat, and as soon as Alli came back home and saw that Spooky was missing, her anxiety went that much higher, she was getting more and more worried.

Thursday night late I struggled at getting her to sleep because she was beyond worried about her cat, and at 11 I finally got her settled in her room. She was pretty worried.

It wasnt long after that that Chylisse got word about where her cat was.

The trucker had stopped in the U.S. and he did a look around his truck to make sure everything was good and he noticed this black cat underneath. He (Spooky) had kind of climbed up on the fuel tank and underneath there he was perched from Redvers all the way to the U.S. until 11:30 at night. It was a pretty big jaunt for the poor cat!

He called, and Christine (Ewart) is the local vet in town, and he was quite adamant that he needed to find out whose cat this was, so she actually got out of bed, drove all the way to the clinicthey live on a farm nearbybut she drove all the way in to get Spookys number and she called me and got me in touch with the truck driver!

Chylisse says she and the truck driver made plans to meet back in Redvers the next day, as the driver said he was passing through Redvers that afternoon.

He brought the cat right back, he put it in a box. My girls were just beaming. Alli was crying when he pulled up to the Co-op.

As a token of appreciation, Chylisse, who is an artist, gave the truck driver one of her worksa picture of a truck.

I figured being a truck driver hed like a print of one of my trucks Id done, she says. A lot of people probably would have found that cat and said there you go, out on the side of the road, find a new home!