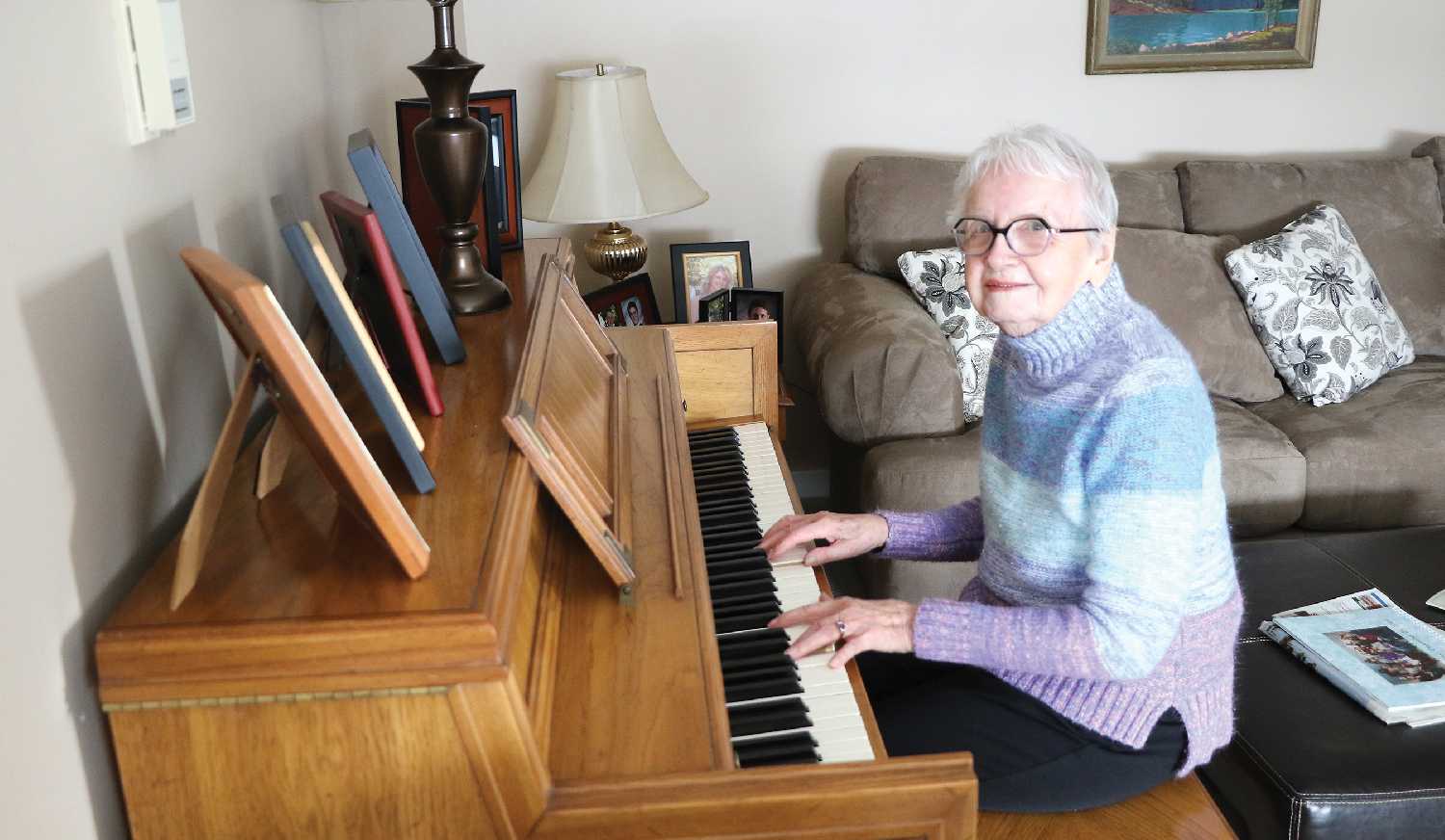 On December 29, Frances McCarthy celebrated her 102 birthday with her family in her home, where she lives independently on her family farm, next to her sons house, Brian McCarthy. The independent woman keeps herself active through cleaning, cooking, playing piano and watching from afar, the work that is being done on the farm.

Full of joy and enthusiasm, its no surprise why Frances McCarthy has reached her milestone birthday of 102 years. On Dec. 29, McCarthy celebrated her birthday with family at her home in Moosomin.

McCarthy has her own house and has been living independently since her husband, John McCarthy, passed away in 2008.

Her son, Brian McCarthy, lives in a house next to her with his family, on their family farm.

When asked if she felt her age, McCarthy said not at all.

Living for more than a century, McCarthy says she had to evolve with the times.

Ive seen a lot of changes in my day. Ive lived before radio was even talked about. Now they have T.V., and there are iPads and there are telephones, just everything, she says.

Ive always lived on a farm and Ive seen the changes in the farm. Back in the days when they used horses for everything, tractors werent even heard of, hardly. A lot has changed.

Growing up and living on a farm her whole life, McCarthy says she feels at home living there.

One time I looked into town to see if I should get a suite, but Im a farm girl. Ive always lived on a farm, she says.

I feel as if I lived in town and looked out my window I wouldnt see anything, but here I can look out and see whats going on. We just got 17 brand new calves here, its calving season and well have over 200 by the time were finished.

McCarthy says she doesnt mind being alone and enjoys living by herself.

Born in 1919, McCarthy has experienced the drastic changes and development of what farming was like in the early 1920s, to what it has become now in the 21st century.

My dad was a farmer too, I remember one year he thought he had a really great crop for 25 bushels to the acre, now theyre looking for 75, she says.

Its different the way now that they work the land and work everything, back in those days with $10 you could buy your groceries, now you cant do much with that.

The independent woman keeps herself active through cleaning, cooking, playing piano and watching from afar, the work that is being done on the farm.

I play the piano, my fingers can still play the piano. My eyesight is not that good now so I dont use music sheets, I just play by ear old pieces I used to know, McCarthy says.

Way back when my sister and I were little kids we used to sing songs, and I remember some of them, I let my fingers and my ears go and just play.

She says she thinks her secret to living a long healthy life is because of inheriting her dads genetics.

I think I got my good genes from my dad. My dad was a strong man. He died when he was 92 and here Im at this age, and Im still able to do all those things he did, she says.

Throughout her 102 years of living, she talks about electricity being the biggest change in the world that shes seen.

I think electricity has been the biggest change. Thats made the biggest difference you know, to live in a house where you have your fridge, and your deep freeze, running water and everything, none of that was possible before, McCarthy says.

It was hard work. In those days we would bring a pail out for water, we baked our own bread, we churned our own butter, we milked cows, it was hard. Everyone else did the same thing.

McCarthy says she misses those days of socializing with people around the farm.

One thing where I do notice a difference in those days, is the district you know, you were like one large group. You would visit back and forth, you would have your card games and your dances at school and everything, now theres nothing. You go to town or you go to the pub, you do whatever, she says.

We did a lot of what they called old time dancing. The old Waltzes, not like the kids today where they get up and jump around, we really danced.

From the older days McCarthy says she misses when people would visit each other on the farms.

We would get to see our friends all the time, the same people, now we dont see anybody.

No one visits around the farm anymore, everyone goes to town. We used to have our own gang, we would cook up a big supper and then have a whole gang, now we dont do those things.

What family means to Frances
Being a widow, a mother of four children, seven grandchildren and eight great-grandchildren, McCarthy says her family is a major cornerstone in her life and brings her a lot of happiness.

Its like a root of a tree, they send out the branches, then comes the leaves and the flowers and then everything flourishes.

Im just so proud of them, there isnt one that I can criticize for anything.
I just feel that Ive created a wonderful family tree, and thats the most important thing.

McCarthy says shes grateful to have her children care for her during this time of her life.

She mentions how happy she is to have Brian bring her groceries every week and to receive daily phone calls from her daughter Rosemary.

Im so appreciative. I guess it feels like youve accomplished something, if youre proud of your family and your kids, it just means so much.

Im just so proud of all of them that I feel like Im leaving something thats worthwhile. I cant live forever and that never bothers me. I dont think about dying.

Although aware of her age, McCarthy says shes not fearful of death. She wakes up every morning and doesnt even think about it.

Its something that I know needs to happen, but I dont go to bed thinking about it or anything. When you get to my age, you know you cant live forever, but I have lived a full life time. Ive seen it from beginning to end really.

Ive been through the good times and the bad times, you take what comes and make the most of it.

From farming to being a mother, grandmother and great-grandmother, she says shes experienced a great and happy life through living just over a century long.